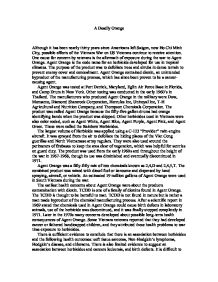 Although it has been nearly thirty years since Americans left Saigon, now Ho Chi Minh City, possible effects of the Vietnam War on US Veterans continue to receive attention. One cause for concern by veterans is the aftermath of exposure during the war to Agent Orange. Agent Orange is the code name for an herbicide developed for use in tropical climates. The purpose of the product was to defoliate trees and shrubs in dense terrain to prevent enemy cover and concealment. Agent Orange contained dioxin, an unintended byproduct of the manufacturing process, which has since been proven to be a cancer-causing agent.
Agent Orange was tested at Fort Detrick, Maryland, Eglin Air Force Base in Florida, and Camp Drum in New York. Other testing was conducted in the early 1960’s in Thailand. The manufacturers who produced Agent Orange in the military were Dow, Monsanto, Diamond Shamrock Corporation, Hercules Inc, Uniroyal Inc, T-H Agricultural and Nutrition Company, and Thompson Chemicals Corporation. The product was called Agent Orange because the fifty-five gallon drums had orange identifying bands when the product was shipped. Other herbicides used in Vietnam were also color coded, such as Agent White, Agent Blue, Agent Purple, Agent Pink, and Agent Green. These were called the Rainbow Herbicides.
The largest volume of Herbicide was applied using a C-123 “Provider” twin-engine aircraft. It was sprayed from the air to defoliate the hiding places of the Viet Cong guerillas and North Vietnamese army regulars. They were also used around the perimeters of firebases to keep the area clear of vegetation, which was helpful for sentries on guard duty. The product was used from the early 1960s and throughout the height of the war in 1967-1968, though its use was diminished and eventually discontinued in 1971.
Agent Orange was a fifty-fifty mix of two chemicals known as 2,4,D and 2,4,5,T. The combined product was mixed with diesel fuel or kerosene and dispersed by hand spraying, aircraft, or vehicle. An estimated 19 million gallons of Agent Orange were used in South Vietnam during the war.
The earliest health concerns about Agent Orange were about the products contamination with dioxin. TCDD is one of a family of dioxins found in Agent Orange. The TCDD is thought to be harmful to man. TCDD is not found in nature but is rather a man made byproduct of the chemical manufacturing process. After a scientific report in 1969 stated that chemicals used in Agent Orange could cause birth defects in laboratory animals, use of the herbicide was discontinued, and it was finally stopped completely in 1971. Later in the 1970s many concerns developed about possible long-term health consequences of Agent Orange. Some Vietnam veterans reported that they had developed cancer or fathered handicapped children, and they attributed these health problems to war time exposure to herbicides.
There is sufficient evidence to conclude that there is an association between herbicides and the following health outcomes: soft tissue sarcoma, Non-Hodgkin’s lymphoma, Hodgkin’s disease, and chloracne. There is also limited evidence to suggest an association between herbicides and cancers leukemia, and birth defects. It is difficult to get a clear picture of levels of exposure for Vietnam veterans because levels varied from vary low to very high, depending on the individual.
Veterans who were exposed to extensive spraying of over nineteen million gallons of herbicide were participants in Operation Ranch Hand. These veterans received high exposure levels to dioxins and have had the most health problems however other Vietnam veterans, especially former ground troops not directly involved in the spraying, also have had some health issues.
Veterans were not allowed to sue the government for injuries suffered while in the military. In 1979 a class action lawsuit was filed on behalf of veterans against the chemical companies and settled out of court. These funds were distributed in 1992. Agent Orange and other herbicides caused many veterans to have physical problems after the war, and veterans groups are still studying its effects today.