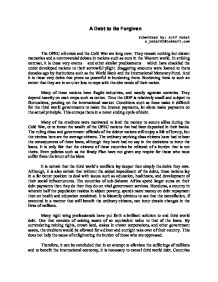 A Debt to Be Forgiven.

A Debt to Be Forgiven Submitted by: Arif Patel [email protected] The OPEC oil crisis and the Cold War are long over. They remain nothing but distant memories and a controversial debate in nations such as ours in the Western world. In striking contrast, it is these very events - and other similar predicaments - which have shackled the under-developed nations to their sorrowful plight. Staggering amounts were loaned to them decades ago by institutions such as the World Bank and the International Monetary Fund. And it is these very debts that prove so powerful in burdening them. Burdening them to such an extent that they are in an utter loss to cope with the dire needs of their nation. ...read more.

The ruling class and government officials of the debtor nations still enjoy a life of luxury, but the victims here are the average citizens. The ordinary working class citizens have had to bear the consequences of these loans, although they have had no say in the decisions to incur the loans. It is only fair that the citizens of these countries be relieved of a burden that is not theirs. Even policies such as the Brady Plan have not given any respite for those who must suffer from the brunt of the blow. It is certain that the third world's conflicts lay deeper then simply the debts they owe. Although, it is also certain that without the added impediment of the debts, these nations lay in a far better position to deal with issues such as education, healthcare, and development of their social infrastructures. ...read more.

Many right wing professionals have put forth a brilliant solution to end third-world debt. One that consists of seizing assets of an equivalent value to that of the loans. By surrendering mining rights, crown land, stakes in crown corporations, and other government assets, the creditors would be allowed for a direct and outright take over of their country. This does not help the cause of enlightening the burden of those who are oppressed. Therefore, it can be concluded that in an attempt to alleviate the sufferings of millions and to benefit the international economy, it is necessary to cancel third world debt. Countries such as Peru and Mexico have been unable to repay their loans and have declared bankruptcy. If more countries follow suit, a collapse of the entire world financial system is eminent. Urgent and immediate measures must be taken to prevent such a catastrophe. ...read more.