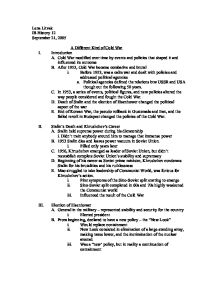 A Different Kind of Cold WarI. IntroductionA. Cold War modified over time by events and policies that shaped it and influenced its outcomeB. After 1953, Cold War became combative and brutal

Lena Litvak IB History 12 September 21, 2005 A Different Kind of Cold War I. Introduction A. Cold War modified over time by events and policies that shaped it and influenced its outcome B. After 1953, Cold War became combative and brutal i. Before 1953, was a calm war and dealt with policies and addressed political agencies a. Political agencies defined the relations btw USSR and USA though out the following 50 years. C. In 1953, a series of events, political figures, and new policies altered the way people considered and fought the Cold War. D. Death of Stalin and the election of Eisenhower changed the political aspect of the war E. End of Korean War, the pseudo rollback in Guatemala and Iran, and the failed revolt in Budapest changed the policies of the Cold War. ...read more.

Influenced the result of the Cold War III. Election of Eisenhower A. General in the military - represented stability and security for the country i. Elected president B. From beginning, declared to have a new policy - the "New Look" i. Would replace containment ii. New Look consisted in elimination of a large standing army, making taxes lower, and the incrimination of the nuclear arsenal. iii. Was a "new' policy, but in reality a continuation of containment C. Eisenhower primary goal was to end the War in Korea i. He succeeded ii. Ordered North Korea army to return to 38th parallel and reestablish it as official border iii. Other choice was the Us would drop atomic bomb in North Koreas D. ...read more.

Thousands of people were killed in the capital, Budapest D. Eastern Europeans felt cheated by US and learned their lesson. E. The Hungarian Revolt shaped and modified the Cold War, bc US realized that its power was not as large as its influence and this is very much showed in 1956. i. Could not force people to do what it wanted VI. Conclusion A. After 1953, Cold War was affected by a serious of changes that modified it and its outcome. B. Political branch, it was highly affected by the shifts of power in both the superpower, US and USSR, which brought new tactics and new policies to fight it C. Military branch, war changed because US experimented new policies and strengthened itself. D. Significant to know that this period of time saw only slight changes in its tone, and not radical changes in its policies, like after the Cuban Missile Crisis. ...read more.