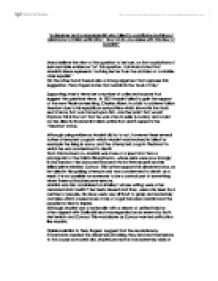 A dreamer and a propagandist who failed to contribute anything of substance to Italian unification. How far do you agree with this view of Mazzini?

'A dreamer and a propagandist who failed to contribute anything of substance to Italian unification.' How far do you agree with this view of Mazzini?' Many believe the view of the question to be true, on the foundations of surmountable evidence 'for' this question. Karl Marx stated that Mazzini's ideas represents "nothing better than the old idea of a middle-class republic." On the other hand there is also a strong argument that opposes this suggestion. Perry Rogers states that Mazzini is the "Soul of Italy," Supporting Marx's views are a number of collected sources that suggest the questions views . In 1831 Mazzini failed to gain the support of the new Piedmontese king, Charles Albert, in a bid to achieve Italian freedom due to his republican sympathies which shows his ...read more.

This further supports his dreamer status, as he failed in his uprising attempts and was condemned to death as a result. It is not possible for someone to be a central part of something when there actions become remote. Mazzini was also considered an intellect whose writing were often censored and couldn't be freely viewed and they were only seen by a number of people, his views were very difficult to grasp and extremely complex which caused even more of a gulf between Mazzini and the people he tried to inspire. Although Mazzini was a nationalist with a dream of unified italy he often argued with Garibaldi and was regarded as an enemy by both Metternich and Cavour. ...read more.

This dilutes the dreamer status as managed his youn italy to work toward a common ground this was a theory that he had took to practice successfully. Although his leadership in 1849 of the roman republic was very brief and could not withstand the french millitary force, it inspired many and showed that liberal Italians could govern effectively. In conclusion there are many theories and plans that mazzini failed to operate successfully but his founding of the Young italy in my opinion destroys the status of he being a 'Dreamer' on the other hand I do agree with the propagandist, he was able to spread his word even due to the complexties of his work he was able to be an active member even from a back seat which in my opinion makes him a good propagandist. ...read more.