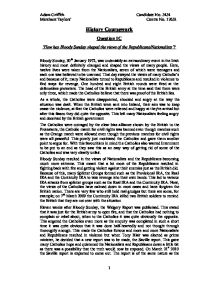 History Coursework Question 1C 'How has Bloody Sunday shaped the views of the Republicans/Nationalists'? Bloody Sunday, 30th January 1972, was undeniably an extraordinary event in the Irish history and most definitely changed and shaped the views of many people. Here, twelve lives were taken from the Nationalists, seven of which were teenagers and each one was believed to be unarmed. That day swayed the views of many Catholic's and because of it; many Nationalists turned to Republicans and resulted in violence to find ways for revenge. One hundred and eight British rounds were fired at the defenceless protesters. The head of the British army at the time said that there were only three, which made the Catholics believe that there was proof of the British lies. As a whole, the Catholics were disappointed, shocked and angry at the way the situation was dealt. When the British were sent into Ireland, their aim was to keep cease the violence, at first the Catholics were relieved and happy at they're arrival but after this fiasco they did quite the opposite. This left many Nationalists feeling angry and deceived by the British government The Catholics were outraged by the clear bias alliance shown by the British to the Protestants, the Catholic march for civil rights was banned even though marches such as the Orange march were allowed even though the previous marches for civil rights were all peaceful. ...read more.

So technically, for the British it is an all lose situation. To conclude, I believe that the general effect of Bloody Sunday on the Catholics at the time of the event was that it polarised the majority of their views. A definition of the word polarised is 'to divide or cause to divide into two sharply contrasting groups or beliefs'. This means that many people who were Nationalist or Catholic ended up turning into Republicans who were furious at the British Government and the British Army. Question 1B 'How has Partition shaped the views of the Loyalists/Unionists'? On 6th December 1922 Ireland was divided into two sections. The main reason for this was to attempt to keep peace between the ongoing conflict and dispute between the Catholics and the Protestants. Originally, the Protestants wanted for the whole of Ireland to be part of Great Britain, disaster for them would be for the whole of Ireland to be independent. It is difficult to answer this question with an exact analysis as there was an enormous variation in the thoughts of the Protestants and the Loyalists. One of the most prominent shaping factors of the Protestant views was their fear of the Catholics. Partition divided the country into two, giving around a fifth of the land to the Catholics. After this, the Protestants began to feel threatened and besieged by the Catholics as their country, Northern Ireland was now surrounded by the land of the Catholics, now called the Republic of Ireland. ...read more.

To this present day there are still many Protestants that are scared of the IRA, as there are still IRA attacks. The Majority of the Protestants thought the partition would separate the two sides and the IRA tension would ease down. As the Catholics greatly outnumbered the Protestants the Protestants feared power sharing, as they knew that their voices would no longer be heard. One of the original policies of the Constitution of the Republic of Ireland created in 1922 was to Unite Ireland but the Protestants dropped it. Whenever there was an election in Londonderry the Protestants would use Gerrymandering to reassure that they would win. Another example of the Protestant fear of power sharing was when Terence O'Neil was voted out as there were suspicions that he would share some of the power. The Unionists even made a strike in 1973-1974 against the power sharing agreement In conclusion I believe that over all, I think that the Unionists saw partition as an easy escape as many of them thought that the punishment would have been worse. They also saw partition as an easy escape from the Republican revenge. Besides, they only signed the agreement thinking that it was only temporary and was a small step in the right direction in the sense that not all of Ireland was independent and they remained under British rule. Now, there is a social divide between the Catholics and the Protestants but there isn't much anger between the two. ?? ?? ?? ?? Adam Griffith Candidate No. 3434 Merchant Taylors' Centre No. 17632 1 ...read more.