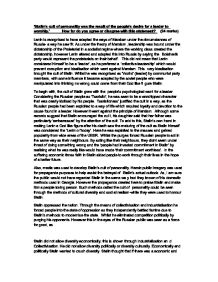 Stalins cult of personality was the result of the peoples desire for a leader to worship. How far do you agree or disagree with this statement?

'Stalin's cult of personality was the result of the people's desire for a leader to worship.' How far do you agree or disagree with this statement? (24 marks) Lenin is recognised to have adapted the ways of Marxism under the circumstances of Russia- a way he saw fit. As under the theory of Marxism, leadership was bound under the dictatorship of the Proletariat in a socialist regime where the working class created the dictatorship, however Lenin altered and adapted this into Russia by saying the Bolshevik party would represent the proletariats on their behalf. This did not mean that Lenin considered himself to be a 'leader', as he preferred a 'collective leadership' which would prevent corruption and idealisation which went against Marxism. This very idealisation brought the cult of Stalin. Whilst he was recognised as 'Vozhd' (leader) by communist party members, with some influence it became adapted by the soviet people who were manipulated into thinking no wrong could come from their God like figure Stalin. ...read more.

By acting like their neighbours, they didnt seem under threat of doing something wrong and the 'people had invested commitment in Stalin' by realising what he was really like would have made 'their commitment worthless'. In the suffering economic times faith in Stalin aided people to work through their lives in the hope of a better future. Also, media was used to develop Stalin's cult of personality. Heroic public imagery was used for propaganda purposes to help assist the betrayal of Stalin's actual outlook. As, I am sure the public would not have regarded Stalin in the same way had they known of his domestic methods used in Georgia. However the propaganda created here to praise Stalin and make him a people loving person. Such methods called the cult of personality could be seen through the methods of cultural diversity and social realism-while they were used to honour Stalin. ...read more.

Socialist Realism meant seeing life as it was becoming and as it was ought to be rather than what it was. Stalin saw artists as the industrial system because, they could products that benefit Stalin. Therefore, books, articles, paintings and theatre productions all idolised Stalin. This led to Stalin's cult of personality and resulted in the people's desire for a leader to worship. For example, newspapers were strictly controlled and were used to spread the Communist Party. Radio Stations were controlled by the government. Any new novels had to be conformed to Socialist Realism. All new films had to be personally approved by Stalin, lots of films promoted Stain and the Bolshevik party as being right. All these factors led to Stalin being worshipped. However, for some people life did improve for them and they needed or wanted someone to thank. They believed policies such as education, great order, and Stalin's work in rooting out enemies and fighting for victory in the Second World War were all works of genius and he should be rewarded. ...read more.