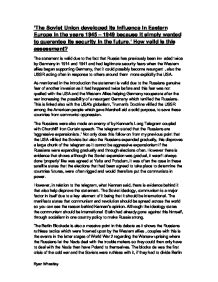 The Soviet Union was aggressively expansionist and showed little enthusiasm for dtente. How valid is this statement?

‘The Soviet Union developed its influence in Eastern Europe in the years 1945 – 1949 because it simply wanted to guarantee its security in the future.’ How valid is this assessment?

The statement is valid due to the fact that Russia has previously been invaded twice by Germany in 1914 and 1941 and had legitimate security fears when the Western allies began supporting Germany, that it could possibly become resurgent, also the USSR acting often in response to others around them more explicitly the USA.

As mentioned in the introduction the statement is valid due to the Russians genuine fear of another invasion as it had happened twice before and this fear was not quelled with the USA and the Western Allies helping Germany recuperate after the war increasing the possibility of a resurgent Germany which terrified the Russians. This is linked also with the USA’s globalism, Truman’s Doctrine vilified the USSR among the American people which gave Marshall aid a solid purpose, to save these countries from communist oppression.

The Russians were also made an enemy of by Kennan’s Long Telegram coupled with Churchill’ Iron Curtain speech. The telegram stated that the Russians are ‘aggressive expansionists.’ Not only does this follow on from my previous point that the USA vilified the Soviets but also the Russians expanded gradually, this disproves a large chunk of the telegram as it cannot be aggressive expansionism if the Russians were expanding gradually and through elections often. However there is evidence that shows although the Soviet expansion was gradual, it wasn’t always done ‘properly’ like was agreed at Yalta and Potsdam, it was often the case in these satellite states that the elections that had been agreed to take place to determine the countries futures, were often rigged and would therefore put the communists in power.

However, in relation to the telegram, what Kennan said, there is evidence behind it that also help disprove the statement. The Soviet ideology, communism is a major factor in itself due to a key element of it being that it should be international. The manifesto states that communism and revolution should be spread across the world so you can see the reason behind Kennan’s opinion. Although the ideology states the communism should be international Stalin had already gone against this himself, through socialism in one country policy to make Russia strong.

The Berlin Blockade is also a massive point in this debate as it shows the Russians ruthless tactics which were frowned upon by the Western allies, couples with this is the events in the latter stages of World War 2 regarding the Warsaw uprising where the Russians let the Nazis deal with the trouble makers so they could then only have to deal with the Nazis then have Poland to themselves. The blockade was the first crisis of the cold war and the Soviets were ruthless with it, if they had to divide Berlin they wouldn’t help the Western side at all, they cut all supply links to help increase their influence in Eastern Germany, this was very unpopular and hence why the Berlin Airlift came into play.

To conclude the statement is partially correct and there is evidence to support that, the most important being the fear factor, due to the Russians being invaded twice before with horrific consequences so this made them want buffer zones to be safe from invasion again, because it seemed as Germany was returning to full strength again through help of the allies then later being accepted into NATO.