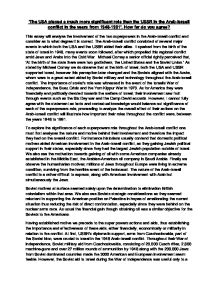 The USA played a much more significant role than the USSR in the Arab-Israeli conflict in the years from 1948-1991. How far do you agree?

'The USA played a much more significant role than the USSR in the Arab-Israeli conflict in the years from 1948-1991'. How far do you agree? This essay will analyse the involvement of the two superpowers in the Arab-Israeli conflict and consider as to what degree it is correct. The Arab-Israeli conflict consisted of several major events in which both the USA and the USSR aided their allies. It sparked from the birth of the state of Israel in 1948, many events soon followed, after which propelled this regional conflict amid Jews and Arabs into the Cold War. Michael Comay a senior official rightly perceived that, 'At the birth of the state there were two godfathers, the United States and the Soviet Union.' As stated by Michael Comay we do observe that at the birth of Israel, both the USA and USSR supported Israel, however this perception later changed and the Soviets aligned with the Arabs, whom were to a great extent aided by Soviet military and technology throughout the Arab-Israeli conflict. The importance of soviet's role was witnessed in the event of the Israelis War of Independence, the Suez Crisis and the Yom Kippur War in 1973. As for America they were financially and politically devoted towards the welfare of Israel; their involvement saw fruit through events such as the Six Day war and the Camp David accords. ...read more.

America however played a significant role not just as a mediator for Israel throughout the conflict but their key technological and military capabilities proved useful to the Egyptians throughout the conflict too. We saw that much of American weapons had been used throughout the conflict as compared to the Soviets. On the other hand, it can be considered that the Jews, Israelis, played the most significant role throughout the Arab-Israeli conflict, they were in the battlefields and implemented most of the strategies for battles however the US military and technological aid was of immense significance throughout several conflicts, tools such as A-4 Skyhawk along with other vital aircrafts, along with the American military training for the Israeli's such as the training missions in Riyadh. Before long the Soviets decided to ally with the Arabs, realising their plans for Israel had failed as a result of Israeli alliance to the West during the West and East Cold War. The significance of their involvement with the Arab was seen throughout the Arab-Israeli conflict in 1954, when they vetoed a Security Council resolution in relation to the Syrian-Israeli water dispute because of Arab objections for the first time. This elicited Israeli complaints that resolutions recognizing its rights could not pass because of the Soviet veto policy. ...read more.

Nevertheless, the peace lasted momentarily as in 1981 Sadat was assassinated by Muslim extremists and hopes of peace faded. Later in March 1985, Mikhail Gorbachev became the Secretary General of the CPSU and in April he declared perestroika. It took more than six years before Moscow consented to restore diplomatic relations with Israel on October 19, 1991, just 2 months prior to the collapse of the USSR. The USSR role by the 1980s had diminished compared to the American which to this day is continually involved in the Middle East. In conclusion to the question I find that the statement bears a great deal of credibility however it is fair to recognize other significant members of the Arab-Israeli conflict such as the Soviets and the British and French. However the ultimately the American played the most important role, in mediating for Israel, financially and militarily aiding not only Israel but Egyptians, solving the Camp David accord agreements along with events such as the Six day war and Yom Kippur War where American involvement had great effect on the outcome. Therefore I have to agree to quite a large extent that the Americans played a more significant role for if they were not there the outcome of the conflict would certainly have been different. RYAN LAPORTE ...read more.