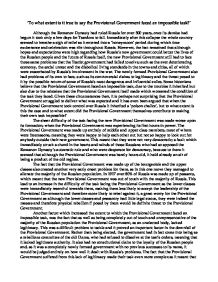 To what extent is it true to say the Provisional Government faced an impossible task?

This factor would not have endeared them to the Russian people, nor would it have done anything to help the fact that they were supposed to be trying to gain their respect and support, as it showed the Provisional Government as being weak and unable to assert themselves. The biggest challenge from the Soviet to the Provisional Government's authority however, came as the news of the Tsar's fall spread, causing soviets to be elected all over Russia who soon started sending representatives to the Petrograd Soviet. The Soviet could now claim to be more representative that the Provisional Government itself, which came as a massive blow to the Government because it made it even harder for them to get the Russian people on their side; to support them and to obey them. Another great threat to the Provisional Government was the leader of the Bolshevik party, Lenin. In the months after the February Revolution up until April 1917, the Petrograd Bolsheviks had accepted the Dual Authority as part of a genuine revolution and they had been willing to work with other revolutionary and reformist parties, however Lenin's return changed all that. On his arrival at Petrograd's Finland Station on April 3rd, he stood up in front of the crowd and condemned the recently formed Provisional Government, claiming that the February Revolution, far from giving Russia political freedom, had simply created a 'parliamentary-bourgeois republic'. He went on to release his April Theses in which he rejected the idea of a dual authority and stated that the Revolution had not been genuine at all, but rather had been a coup which had given the authority to ex-tsarist aristocrats and the bourgeoisie alone. ...read more.

The government however, wanted to remain in the war for fear that if they pulled out they would lose not only land to the Germans, but that they would also lose Russia's foreign investors, which were an essential part of Russia's economy. The fact that the government refused to listen to the wants of the ordinary Russian people in relation to the war right from the very start made them reluctant to obey the Provisional Government and many began to challenge its authenticity. In conclusion, the claim that the Provisional Government faced an impossible task holds great weight and was almost certainly true towards the end of the Provisional Government's reign, however it didn't necessarily start out this way. Although Russia's economic turmoil and social problems together faced the new Provisional Government with an extremely difficult and complex task, the task they faced may have been solved by another assembly had they been left in charge of the country, but the Provisional Government's continuous mistakes and problems eventually led to their task becoming impossible. Had they not faced accusations over their authenticity and legitimacy, or hostilities towards their wholly middle and upper class membership they would almost certainly have had a better beginning to their period in office and could have enjoyed a higher chance of survival. As it stands however, the Provisional Government were unable to cope with the problems which they had inherited from the Romanovs, let alone the fresh problems that began to stack up against them once in office such as their uncertain claims to legitimacy and the threat posed to them by the Petrograd Soviet and the return of dangerous Russian exiles, and eventually they managed to turn a task which had started out as being almost impossible but not quite, into one which was completely unachievable. ...read more.