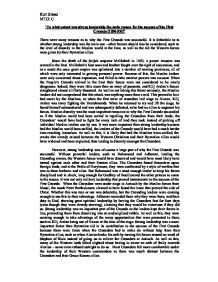 To what extent was strong leadership the main reason for the success of the First Crusade (1096-99)?

'To what extent was strong leadership the main reason for the success of the First Crusade (1096-99)?' There were many reasons as to why the First Crusade was successful. It is debatable as to whether strong leadership was the main one - other factors should also be considered, such as the level of disunity in the Muslim world at the time, as well as the aid the Western forces were given by their Byzantine allies. Since the death of the Seljuk emperor Malikshah in 1092, a power vacuum was created in the East. Malikshah's four sons and brother fought over the right of succession, and as a result the once great empire was splintered into a number of warring provinces, all of which were only interested in gaining personal power. Because of this, the Muslim leaders were only concerned about expansion, and failed to take exterior powers into account. When the People's Crusade arrived in the East their forces were not considered to be overly dangerous. ...read more.

The Crusaders found themselves upon foreign lands, and at the Battle of Dorylaeum, they were confronted by a style of warfare that was to them barbaric and alien. But Bohemond was a stout enough leader to keep his forces disciplined and in check, long enough for Godfrey of Bouillon and the other princes to come to the rescue. It was not only military leadership that proved instrumental to the success of the First Crusade. When the Crusaders were under siege in Antioch by the Muslim forces from Mosul, the monk Peter Bartholomew claimed to have found the lance that pierced the side of Christ. Whether this was true or not was debatable, but the Crusading leaders were cunning enough to use this to their advantage. Adhemar reminded them why they were there, and their duty to God, showing great spiritual leadership by having the Crusaders fast for four days (even though they were already starving), claiming that they would be victorious if they did so. ...read more.

So (in a way) Byzantium was bountiful - should they reach it, Jerusalem was theirs for the taking. As well as this, the Crusaders found themselves upon foreign soil, and would have had a much harder time of navigating the land without the help of guides out of Byzantium. With the aid of their Byzantine guides, the Crusaders were shown the safest routes through Anatolia, and as thus they were able to avoid the more dangerous regions were the Muslims still held power. There were also times when Alexius did go to the aid of his Western allies, such as when he had a flotilla of ships built upon Ascanion Lake to blockade Nicaea's port (although in truth, he went on to undermine his allies by having Nicaea surrender to Byzantium without the Crusaders' knowledge). In conclusion, there are many reasons as to why the First Crusade was a success, but it was the disunity in the Muslim world that was the most crucial, as had the Muslims been unified, it is debatable whether the Crusaders would have ever made it to Jerusalem. Kurt Shead MTG: C ...read more.