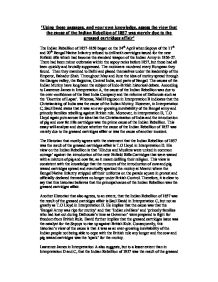 Using these passages, and your own knowledge, assess the view that the cause of the Indian Rebellion of 1857 was merely due to the greased cartridges affair

'Using these passages, and your own knowledge, assess the view that the cause of the Indian Rebellion of 1857 was merely due to the greased cartridges affair' The Indian Rebellion of 1857-1858 began on the 24th April when Sepoys of the 11th and 20th Bengal Native Infantry refused to drill with cartridges issued for the new Enfield rifle which had become the standard weapon of the Indian Army in 1856-57. There had been minor outbreaks within the sepoy ranks before 1857, but these had all been quickly and brutally suppressed. The mutineers murdered every European they found. Then they marched to Delhi and placed themselves under the leadership of the Emperor, Bahadur Shah. Throughout May and June the idea of mutiny spread through the Ganges valley, the Rajputna, Central India, and parts of Bengal. The causes of the Indian Mutiny have long been the subject of Indo-British historical debate. According to Lawrence James in Interpretation A, the cause of the Indian Rebellion was due to the over-confidence of the East India Company and the reforms of Dalhousie such as the 'Doctrine of Lapse'. ...read more.

Officers in the Indian army were even encouraged to preach Christianity to their soldiers and to use the experience to promote western beliefs above Indian. This consequently infuriated the Sepoys, and at Vellore in the summer of 1806, precipitated a mutiny. Consequently, this historian's view of the cause is that it was not the issue of the greased cartridges but the attempts of the Company to Christianise India. From analysing the interpretations above, it is clear to say that the issue concerning the cartridges being lubricated with cow and pig fat played a vital role in the sparking of the Indian Rebellion of 1857. However, it must be considered that there were other factors that increased the chances of an outcome of a rebellion, such as; the reforms of Dalhousie and the 'Doctrine of Lapse' and the plans to Christianise India by interfering with Indian culture. Ultimately, the rebellion was the cause of many interlinking issues, but was inevitably sparked off by the greased cartridges affair. ...read more.