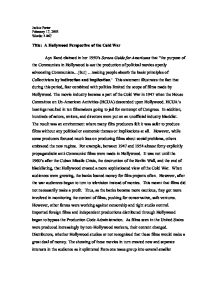 A Hollywood Perspective of the Cold War.

Jackie Porter February 17, 2003 Words: 3 867 Title: A Hollywood Perspective of the Cold War Ayn Rand claimed in her 1950's Screen Guide for Americans that "the purpose of the Communists in Hollywood is not the production of political movies openly advocating Communism...[but] ...making people absorb the basic principles of Collectivism by indirection and implication.' This statement illustrates the fact that during this period, fear combined with politics limited the scope of films made by Hollywood. The movie industry became a part of the Cold War in 1947 when the House Committee on Un-American Activities (HCUA) descended upon Hollywood. HCUA's hearings resulted in ten filmmakers going to jail for contempt of Congress. In addition, hundreds of actors, writers, and directors were put on an unofficial industry blacklist. The result was an environment where many film producers felt it was safer to produce films without any political or economic themes or implications at all. However, while some producers focused much less on producing films about social problems, others embraced the new regime. For example, between 1947 and 1954 almost forty explicitly propagandistic anti-Communist films were made in Hollywood. It was not until the 1960's after the Cuban Missile Crisis, the destruction of the Berlin Wall, and the end of blacklisting, that Hollywood created a more sophisticated view of the Cold War. When audiences were growing, the banks loaned money for film projects often. However, after the war audiences began to turn to television instead of movies. This meant that films did not necessarily make a profit. Thus, as the banks became more cautious, they got more involved in monitoring the content of films, pushing for conservative, safe ventures. However, other forces were working against censorship and tight studio control. Imported foreign films and independent productions distributed through Hollywood began to bypass the Production Code Administration. As films seen in the United States were produced increasingly by non-Hollywood workers, their content changed. ...read more.

What about you?" iv Lemus, the do-gooder American then replies, "If ever I have to break you neck I promise to do so with a minimal force."iv Thus, the ideological differences that the director Martin Ritt is trying to portray become evident. The Russians see Americans as ignorant yet they will kill countless numbers of people to benefit themselves while Americans will be as gentle as possible in seeking their goals. The constant struggle between the two strong countries to spread their different ideologies is addressed in the movie Red Dawniv when the children ask an American pilot why the Americans and the Russians are fighting the pilot answers, quite simply, "Two toughest kids on the block, sooner or later they gonna fight."v MGM studios presented the Cold War as an inevitable conflict that had to be dealt with. In most Hollywood Cold War movies, particularly those of the 1980's, Americans are presented as much more righteous, ethical people than the Russians. To begin with, Americans are made out to be far more civil people than Russians. For example, in the movie Red Dawnv the KGB (Russians and Cubans), who take over a large part of America, are made to seem outright evil. The anti-Russian sentiment contained in the movie is likelya result of the fear of being blacklisted, and the desire of the production company MGM studios make a profit as supposed to their desire to get a specific point across. They treat Americans civilians as slaves, put them in 're-education camps', try to rape any girl in sight, and try to kill innocent civilians. In The Fourth Protocolv, Russian Major Ross Petrosky follows the orders he receives to kill an innocent boy who carries his bags for him as well as orders to kill a Russian women immediately after he sleeps with her. The Russian women herself is also made out to be a whore as she sleeps with Ross just moments after meeting him. ...read more.

Large studios produced both of these films resulting in Americans being presented as patriotic, good human beings and the Russians as being cold-hearted with few morals or values. In The Fourth Protocol every Communist is involved in a deceptive backstabbing plot aimed at destroying capitalism. In Red Dawn Russians take over an American city and show very little mercy towards all the do-gooder Americans. Hence, it is evident that the 1980's were a time when the anti-Russian sentiment was high. In conclusion, Hollywood undoubtedly does a fantastic job conveying many of important sentiments and ideas that contributed to the Cold War from an American perspective. While some movies are funny and others serious, each touches upon a multitude of much deeper and more important issues. Audiences learn about the fear, trust, politics, patriotism and intense struggle for power which made up the Cold War. The movies provide Americans with the unique opportunity to look back to a time when misunderstandings brought the world to the brink of disaster. i Dr. Strangelove or How I learned To Stop Worrying and Love the Bomb. Directed by Stanley Kubrick. With Peter Sellers, George C. Scott, Sterling Hayden, Keenan Wynn, and Slim Pickens. Columbia Pictures, 1964. ii Fail Safe. Directed by Sydney Lumet. With Dan O'Herlihy, Water Matthau, Frank Overton, Ed Binns, Fritz Weaver, Henry Fonda, and Larry Hagman. Spy Glass Entertainment, 1964. iii The Spy Who Came In From The Cold. Directed by Martin Ritt. With Richard Burton, Claire Bloom, Oskar Werner, Scott Finch, Walter Gotell, and Robert Hardy. Paramount Home Entertainment, 1965. iv Red Dawn. Directed by John Milius. With Patrick Swayze, C. Thomas Howell, Lea Thompson, Charlie Sheen, Darren Dalton, and Jennifer Grey. MGM Home Entertainment, 1984. v The Fourth Protocol. Directed by John Mackenzie. With Michael Caine, Pierce Bronson, Ned Beatty, Joanna Cassidy. Warner Home Video, 1987. vi From Russia With Love. Directed by Terence Young. With Sean Connery, Daniela Bianchi, Pedro Armend�riz, Lotte Lenya, Robert Shaw, Bernard Lee, Eunice Gayson, Walter Gotell, Francis De Wolff, Fred Haggerty, Lois Maxwell, Aliza Gur, Martine Beswick, Martine Beswick, and Desmond Llewelyn. MGM Home Entertainment, 1963. ...read more.