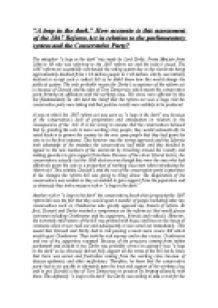 &quot;A leap in the dark.&quot; How accurate is this assessment of the 1867 Reform Act in relation to the parliamentary system and the Conservative Party?

﻿"A leap in the dark." How accurate is this assessment of the 1867 Reform Act in relation to the parliamentary system and the Conservative Party? The metaphor "a leap in the dark" was made by Lord Derby, Prime Minister from 1866 to 68 who was referring to the 1867 reform act and the risks it posed. The 1867 reform act essentially overhauled the voting system due to the electorate being approximately doubled from 1.36 million people to 2.46 million. Derby was initially hesitant to accept such a radical bill as he didn't know how this would change the political system. The only probable reason for Derby's acceptance of the reform act is because of Disraeli and his idea of Tory Democracy which meant the conservative party forming an affiliation with the working class. ...read more.

This however was the wrong approach and the Liberals took advantage of the mistakes the conservatives had made and they decided to appeal to the new members of the electorate by travelling around the country and making speeches to gain support from them. Because of the clever Liberal tactics, the conservatives actually lost the 1868 election even though they were the ones who had effectively given the vote to a proportion of working class men when introducing the reform act. This exhibits Disraeli's and the rest of the conservative party's ignorance to the changes the reform bill was going to bring about. The desperation of the conservatives was evident as they scrambled to gain support from the population and so obviously they took a massive risk or "a leap in the dark." ...read more.

They took the risk anyway and in due course, Cranbourne and two of his supporters resigned. Because of the pressures coming from within parliament and outside it too, Derby was probably correct in saying it was "a leap in the dark" as he obviously did not fully support all the terms of the bill but he knew that there was unrest and frustration coming from the working class because of disease epidemics and other misfortunes. Therefore, he knew that the conservative party had to act quickly to ultimately gain the trust and support of the working class and to put Disraeli's idea of Tory Democracy in practice by forging alliances with them. This definitely "a leap in the dark" but Derby was willing to take a risk for the greater good. ...read more.