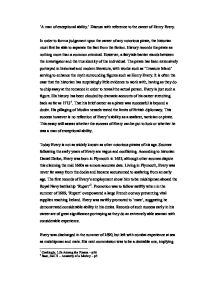 'A man of exceptional ability.' Discuss with reference to the career of Henry Every.

'A man of exceptional ability.' Discuss with reference to the career of Henry Every. In order to form a judgement upon the career of any notorious pirate, the historian must first be able to separate the fact from the fiction. History records the pirate as nothing more than a common criminal. However, a fairytale barrier stands between the investigator and the true identity of the individual. The pirate has been extensively portrayed in historical and modern literature, with works such as 'Treasure Island' serving to enhance the myth surrounding figures such as Henry Every. It is often the case that the historian has surprisingly little evidence to work with, having as they do to chip away at the romance in order to reveal the actual person. Every is just such a figure. His history has been clouded by dramatic accounts of his career stretching back as far as 17131. That his brief career as a pirate was successful is beyond a doubt. His pillaging of Muslim vessels tested the limits of British diplomacy. This success however is no reflection of Every's ability as a seafarer, tactician or pirate. This essay will assess whether the success of Every can be put to luck or whether he was a man of exceptional ability. Today Every is not as widely known as other notorious pirates of his age. Sources following the early years of Every are vague and conflicting. According to historian Daniel Defoe, Every was born in Plymouth in 1653, although other sources dispute this claiming the mid 1660s as a more accurate date. ...read more.

Despite taking fire from the 'Charles' and the fort at la Coru�a, Every made off with the 'Charles' without bloodshed or significant damage to the vessel. The stealth and efficiency of the mutineers led and inspired by Every is again testimony to the ability of the man. Every was an exceptional pirate in terms of his kindness and decency. He was not an aristocrat but a man true to his lowly beginnings. Wherever possible it seems that he treated his men and captives as equals, earning as he did his reputation as the Robin Hood of the pirate world. This can best be demonstrated by his actions in the immediate aftermath of the 'Charles' mutiny. Having determined to seek his fortune as a pirate he turned loose all those on board not part of the mutiny with as much human decency as the circumstances permitted. It was his conduct as much as his success as a pirate that transformed him into a living legend. Ballads and plays based on his life from the time of and immediately after his death demonstrate his reputation as a 'brave outlaw' and have contributed a great deal to the romance which has fostered about his life story. The best example that can be given is that of 'the Successful Pirate', performed in Drury Lane in 17134, in which Every is portrayed as a heroic pirate king. It is just such romance, reputation and embellishment that the historian needs to be wary of when drawing conclusions as to the ability of Every. ...read more.

The Mogul Emperor was enraged at the attack and threatened to remove all English presence from his empire, including the financially vital 'East India Company'. With such a prize on his head and such wealth in his pocket, Every's fleet was disbanded. Like the beginning of his life, very little is known about how Every ended his days. Some historians believe that he settled in America as a rich man under the name of Captain Benjamin Bridgeman. However, others believe that unable to cash in on his wealth due to it being in the form of diamonds, he was cheated out of his fortune by merchants and died in Britain as a poor man. Due to the lack of evidence, the point will probably never be cleared up. Every will live in popular culture as a romanticised figure typifying the pirate stereotype. He is the 'Robin Hood' of the pirate world, fair and kind with his men and providing for his family. However, Captain Henry Every was a seafarer of exceptional ability. Evidence from his first records of employment suggests that he was outstanding in his service with the Royal Navy. His quick promotion and following recommendation show that he was outstanding in his field. As a pirate Every instigated the mutiny on board the 'Charles' and led the vessel to open waters without bloodshed. His diplomacy held together a mutinous crew in doing so landed one of the greatest hauls ever taken by a pirate. That his greatest prize was taken by luck rather than guile is ironic but certainly not typical of the man. He is rightly famed as one of the greatest pirates of the age. ...read more.