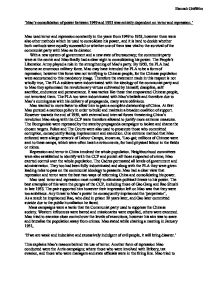 Maos consolidation of power between 1949 and 1953 was entirely dependent on terror and repression.Discuss.

'Mao's consolidation of power between 1949 and 1953 was entirely dependent on terror and repression.' Mao used terror and repression constantly in the years from 1949 to 1953, however there were also other methods which he used to consolidate his power, and it is hard to decide whether both methods were equally successful or whether one of them was vital to the survival of the communist party with Mao as its dictator. With a new system of government and a new state of bureaucracy; the communist party were at the centre and Mao finally had a clear sight to consolidating his power. The People's Liberation Army played a role in the strengthening of Mao's party. By 1950, the PLA had become an enormous military force. Mao may have intended the PLA to be a form of repression; however this force was not terrifying to Chinese people, for the Chinese population were accustomed to this mandatory image. Therefore the statement made in this respect is not wholly true, The PLA soldiers were indoctrinated with the ideology of the communist party and to Mao they epitomised the revolutionary virtues cultivated by himself; discipline, self sacrifice, endurance and perseverance. ...read more.

Mao used terror and repression most notably to eliminate political threats to his power. The best examples of this were the purges of the CCP, including those of Gao Gang and Rao Shushi in late 1953. The pair supported him however their impression left on Mao was that they were too ambitious. Any threat to Mao's power he consequently imprisoned the 'perpetrator', As a result he imprisoned Rao, who died in prison 20 years later, and Gao later committed suicide due to the public humiliation he faced. Mass campaigns were a tactic that the Communist party used to suppress the Chinese society. Western influences were barred and missionaries were expelled, others were executed. Mao tried to exercise close control over the levels of executions, however his aim was to scare and brutalise the population away from crimes. Mao stated while chairing a meeting in January 1951, 'If we are weak and indecisive and excessively indulgent of evil people, it will bring disaster.' This explains Mao's reasons behind the use of terror. ...read more.

As the majority of the population in China were illiterate, Mao wanted to implement education because as a result he would be able to devise more propaganda. He would also then be able to create posters to inform those about public health because this was another improvement he wanted to make. At the time the posters outlined simple practical steps that city dwellers could take for themselves to improve their living conditions. However with the inclusion of words, many steps would not be mistaken and the public health would be better. As mentioned before the majority of Mao's tactics to consolidate his power were mainly with the use of terror and repression. Although there have been no recordings of the Chinese population being fearful, with the amount of terror and strict rules I can imagine there was apprehension throughout the country. However to conclude I disagree with the statement made, because Mao implemented reform. Reform appealed to the Chinese population for they wanted change. Even though Mao did use terror it was in the peasants favour. ?? ?? ?? ?? Hannah Griffiths ...read more.