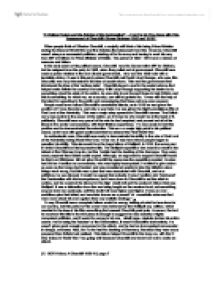 A Political Failure and the Butcher of the Dardanelles! How Far do You Agree with This Assessment of Churchills Career Between 1902 and 1918?

"A Political Failure and the Butcher of the Dardanelles!" - How Far do You Agree with This Assessment of Churchill's Career Between 1902 and 1918? When people think of Winston Churchill, a majority will think of his being Prime Minister during the Second World War and the victories that stemmed from this. However, Churchill wasn't always a successful politician, starting off in the army and having to work his way from MP of Oldham to Prime Minister of Britain. The period of 1902-1918 saw a mixture of success and failure. In the early years of his political career, Churchill was the Conservative MP for Oldham, but he resigned from the party in 1905, when they pulled out of government. Churchill was made a junior minister in the new Liberal government, who won the 1906 vote with a landslide victory. It was in this party where Churchill met David Lloyd George, who was, like Churchill, was very interested in the idea of social reform. ...read more.

Churchill was very proud of the role he had acquired, and poured out all of his ideas to the senior commanders, with their lifetime experience. He was ready to hold the position and he demonstrated the adoration. This was a major high point in his political career, and it was with great excitement that he entered the First World War. An enthusiastic man, Churchill was ready to demonstrate his ability in the role of First Lord of the Admiralty during World War One. However, it was here where people began to question his ability. This stemmed from the huge failure of Gallipoli, in 1915, the same year in which Churchill lost his impressive title. The Gallipoli expedition was meant to result in the defeat of the Ottoman Empire, but the Turkish had the backing of the Germans. They were more prepared than Britain could expect. ...read more.

be wrong, looking at what he has done for our country, but this period of his career was darkened by the Gallipoli expedition, which resulted in the loss of his title; something that caused Churchill great pain. However, the fact he received this title in the first place is enough to suggest he was actually a highly competent politician, and it would be wrong to let one, albeit large, mistake darken his entire career. As for being the 'butcher' of the Dardanelles, it wasn't Churchill's fault entirely. He wasn't given good enough resources for the attack, and he had an incompetent commander in charge, overseas. Also, the Turks had the backing of Germany, therefore they were more prepared than Britain had realised. This failure helped Churchill in the long run, with the D Day victory in World War Two going well because Churchill now knew how not to make an attack. ?? ?? ?? ?? [1]- OCR History A Churchill 1920-45, page 7 ...read more.