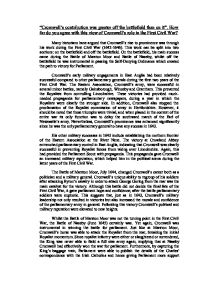 Cromwells contribution was greater off the battlefield than on it. How far do you agree with this view of Cromwells role in the First Civil War?

"Cromwell's contribution was greater off the battlefield than on it". How far do you agree with this view of Cromwell's role in the First Civil War? Many historians have argued that Cromwell's rise to prominence was through his work during the First Civil War (1642-1646). This work can be split into two sections: on the battlefield and off the battlefield. On the battlefield, his main success came during the Battle of Marston Moor and Battle of Naseby, whilst off the battlefield he was instrumental in passing the Self-Denying Ordinance which created the path to victory for Parliament. Cromwell's early military engagements in East Anglia had been relatively successful compared to other parliamentary generals during the first two years of the First Civil War. The Eastern Association, Cromwell's army, were successful in several minor battles, namely Gainsborough, Winceby and Grantham. This prevented the Royalists from controlling Lincolnshire. These victories had provided much-needed propaganda for parliamentary newspapers, during a year in which the Royalists were clearly the stronger side. In addition, Cromwell also stopped the proclamation of the Royalist commission of array in Hertfordshire. However, it should be noted that these triumphs were trivial, and when placed in the context of the entire war its only function was to delay the southward march of the Earl of Newcastle's army. ...read more.

It may appear that all Cromwell's military actions all resulted in victories. This is not the case. Even in 1643, Cromwell had some failures as a soldier. Although he was successful in East Anglia, he completely failed whenever he tried to participate in wider military engagements. By the summer of that year, his military position was as dire as other parliamentary generals, and thus was in no position to provide military support. Meanwhile, Cromwell's military failures after Marston Moor include the Battle of Newbury and Battle of Donnington Castle. However, these failures were minor and did not have as much an impact as his victories. For instance, the Battle of Marston Moor was not decisive, so the loss at Donnington Castle did not mean that parliament lost the opportunity to win the war. On the other hand, Essex's loss at Lostwithiel was much more consequential since it negated the advantage gained at Marston Moor. One might wonder whether if Essex had not lost at Lostwithiel, parliament would have won the war much earlier due to the advantage gained at Marston Moor. Therefore, Cromwell's military failures are cancelled out by his more important successes. These military successes turned Cromwell into a parliamentary hero. As a result, he was able to advance his political influence. In the political arena, Cromwell was able to a more integral part than before the civil war. ...read more.