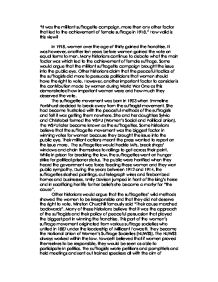 It was the militant suffragette campaign, more then any other factor that led to the achievement of female suffrage in 1918. How valid is this view?

"It was the militant suffragette campaign, more then any other factor that led to the achievement of female suffrage in 1918." How valid is this view? In 1918, women over the age of thirty gained the franchise. It was however, another ten years before women gained the vote on equal terms to men. Many historians continue to debate what the main factor was which led to the achievement of female suffrage. Some would argue that the militant suffragette campaign brought the issue into the public eye. Other historians claim that the peaceful tactics of the suffragists did more to persuade politicians that women should have the right to vote. However, another important factor to consider is the contribution made by women during World War One as this demonstrated how important women were and how much they deserved the vote. The suffragette movement was born in 1903 when Emmeline Pankhurst decided to break away from the suffragist movement. ...read more.

They became the National Union of Women's Suffrage Societies (NUWSS). The NUWSS always worked within the law. Fawcett believed that if women proved themselves to be responsible, they would be seen as able to participate in politics. The suffragists wrote petitions and pamphlets and held meetings and sent out trained speakers all with the aim of changing public opinion. Many people believe the suffragists helped to raise the issue in the public eye. They created the image of women being responsible and therefore helped to get the vote in local elections. However the suffragists were nowhere near close to getting women the vote in national elections. Some MPs had supported resolutions for women's suffrage but there was not a substantial amount of support for an actual bill. Nevertheless it is understandable that the suffragist movement gained considerable support in many quarters for "the cause". Nowadays most historians take the view point that the contribution made by women to the First World War was the main reason that women over thirty eventually gained the vote in 1918 and the right to vote was extended to all women over twenty one in 1928. ...read more.

Ten years later, the dream shared by the suffragettes and suffragists alike was realised and the equal franchise act was passed and all women over twenty-one were given the vote on equal terms to men, irrespective of their social status. To conclude, it is true to say that to a certain extent, the suffragette campaign helped to get women the vote. For it drew attention to the cause of votes for women, however, their militant methods also won them a significant amount of negative publicity and they did not succeed in getting the vote. The suffragists also helped "the cause" by drawing attention to the problems facing women and almost half of the MPs supported them but essentially they did not succeed in gaining the vote either. In my opinion, it was women's contribution to World War One that finally got them the long awaited extension of the franchise. The women proved by filling in for the men, they deserved to participate in the country's decisions. As historian John Ray said "Women proved by their work that they deserved the vote equally to men". ...read more.