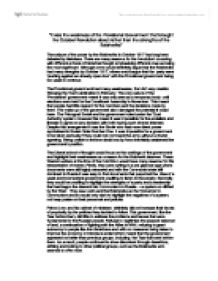 "It was the weakness of the Provisional Government that brought the October Revolution about rather than the strengths of the Bolsheviks" The seizure of the power by the Bolsheviks in October 1917 has long been debated by historians. There are many reasons for the 'revolution' occurring with different schools of historical thought emphasising different ones as being the most significant. Although some would definitely argue that the Bolsheviks had many strengths by October 1917, others would argue that the party were 'pushing against an already open door' with the Provisional government being too weak to continue. The Provisional government had many weaknesses, from its' very creation following the Tsar's abdication in February. The very nature of the 'Provisional' government meant it was only seen as a temporary body until elections were held for the Constituent Assembly in November. This meant that people had little respect for the members and the decisions made by them. The make up of the government also damaged the potential it could have. The Petrograd Soviet and the government ruled under the 'Dual Authority' system. ...read more.

people like the Ukrainians and with no measures being taken to improve the economy or introduce social reform meant that the government appeared no better than previous groups, including the Tsar that went before them. As a result, people continued to show discontent through desertions, striking and looking to other political groups, such as the Bolsheviks who seemed to offer more. With Lenin's return in April and the publication of his Thesis, including the two slogans of 'Peace, Land, Bread' and 'All Power to the Soviets', it appeared that the Bolsheviks could accommodate a huge range of support in Russia. Hungry city workers, frustrated peasants and absconding soldiers from the frontline all felt the party were directly appealing to them and promising to solve these huge issues that the Provisional government had left untouched. The Bolsheviks were the only party that promised an immediate end to fighting and peasant land seizures to be legally recognised. These policies certainly increased the level of support that the party had and throughout the year the numbers choosing to openly back them in the Petrograd Soviet grew. ...read more.

As mentioned, Soviet views would focus mainly on Lenin, but others should be seen as significant. Trotsky was the practical organiser during the seizure of power and his role leading the MRC enabled telegraph offices and railways to be under Bolshevik control. As a 'true Leninist' he was unwilling to boast about his importance following October. Similarly, during Stalin's time in office Trotsky would have been left in the background, as he had been a leadership contender with Stalin after Lenin's death, so it was only after the fall of Communism that his key role would be shown. It is also during the revisionist post glasnost age that the Libertarian view has emerged. With access to more regional documents they would argue that it was the people who forced the revolution and it was people on the ground who forced the change rather that a professional group, such as the Bolsheviks. Libertarians would state that discontent was regularly shown by strikes and that soviets were becoming more and more radicalised. These historians would argue that this force of change would have inevitably lead to change, with or without the Bolsheviks. ...read more.