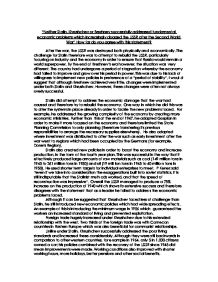 Neither Stalin, Khrushchev or Brezhnev successfully addressed fundamental economic problems which increasingly dogged the USSR after the Second World War How far do you agree with this statement?

"Neither Stalin, Khrushchev or Brezhnev successfully addressed fundamental economic problems which increasingly dogged the USSR after the Second World War" How far do you agree with this statement? After the war, the USSR was destroyed both physically and economically. The challenge for Stalin therefore was to attempt to rebuild the USSR, particularly focusing on industry and the economy in order to ensure that Russia would remain a world superpower. By the end of Brezhnev's era however, the situation was very different. The country had undergone a period of stagnation whereby the economy had failed to improve and grow over his period in power. This was due to his lack of willingness to implement new policies in preference of a "period of stability". I would suggest that although Brezhnev achieved very little, changes were implemented under both Stalin and Khrushchev. However, these changes were often not always overly successful. Stalin did attempt to address the economic damage that the war had caused and therefore try to rebuild the economy. One way in which he did this was to alter the systems in place already in order to tackle the new problems faced. For example, he addressed the growing complexity of the economy by creating more economic ministries. ...read more.

However, he did introduce a limited number of new policies which had equally limited successes. He successfully addressed that Khrushchev's destructive agricultural policies should be reversed, for example in September 1965 Khrushchev's sovnarkhoz reforms of 1957 were ended. He did successfully increase foreign trade though, for example exporting oil and gold natural resources from Siberia and the period of d�tente led to the high priority of western technologies being imported. Although the Stalinist economic reforms successfully improved output there are also criticisms that can be raised as evidence that Stalin failed to address the economic problems. The fourth year plan is accused to have been inflexible as it focused on heavy industry rather than light consumer goods. These items were what the country really needed after it had been damaged by the war but instead industry was based on government priorities. Further than this, the emphasis was put on quantity rather than quality and therefore many of the goods produced were not of the highest quality. For example, in order for factory workers to reach their targets, they would produce more pairs of shoes of small sizes as this was quicker and had smaller production costs. ...read more.

Perhaps his largest failure was not to address the problems with the centralised planning system where many of the economic problems initially sprung from. Under Stalin this was successful but by this time the economy had become far too complex to be centralised. Industry also failed to modernise. For example, using the policy of "storming" was used whereby old equipment was run non-stop until the end of the plan which damaged equipment and wasted resources. Thompson suggests that "in structural terms, soviet planners by 1980 had arguably created the world's largest and most advanced nineteenth-century economy". In conclusion, the extent to the leaders successfully addressed the economic problems in Russia was variable under the different personalities. Stalin arguably faced the biggest challenge and due to the fact he did manage to increase production to such a large extent suggests he was the most successful. Although Khrushchev did not solve all of the problems faced, and his agricultural policies caused more harm than good, he did attempt to address the problems that the USSR were facing. On the other hand, Brezhnev's rule did not show any improvement, and further than this he did not show any attempts to improve the problems. For this reason Brezhnev can be suggested to be the least successful. ?? ?? ?? ?? ...read more.