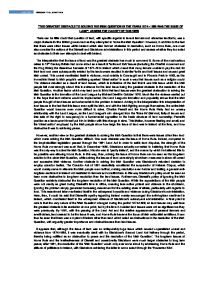 The greatest obstacle to solving the Irish question in the years 1874 - 1886 was the issue of land: assess the validity of this view.

"THE GREATEST OBSTACLE TO SOLVING THE IRISH QUESTION IN THE YEARS 1874 - 1886 WAS THE ISSUE OF LAND": ASSESS THE VALIDITY OF THIS VIEW There can be little doubt that question of land, with specific regards to tenant farmers and absentee landlords, was a major obstacle for the British government as they attempted to 'solve the Irish Question'. However, in addition to the fact that there were other issues within Ireland which also formed obstacles to resolution, such as Home Rule, one must also consider the actions of the Disraeli and Gladstone administrations in this period and assess whether they too acted as obstacles to their own attempts to deal with Ireland. The interpretation that the issue of land was the greatest obstacle has much to commend it. Some of the most serious crises in 19th Century Britain had come about as a result of 'knife and fork' issues (including the Chartist movement and the Plug Riots); the disastrous harvests of 1877-79 in Ireland which meant that many famers unable to pay the ...read more.

to a fundamental opposition to the basic structure of land ownership; Parnell's position as a landowner himself put him in friction with this change in aims. This friction, however fleeting and small, and the 'direct action' employed by the Irish people show how large the issue of land was in Ireland at the time, and how obstructive it was to achieving peace. However, another view on the greatest obstacle to solving the Irish Question is that there were issues other than land which made solving the Irish Question difficult. One such obstacle was the issue of Home Rule. Indeed, compared to the loophole-filled legislation passed through the 1881 Land Act in order to settle land disputes, the strength of the Home Rule movement was such that, in December 1885, Gladstone actually converted to believing that Home Rule was the only way to solve the Irish Question. His aim was to 'pacify Ireland', and the means by which he believed this to be possible was allowing Home Rule. ...read more.

By 1881, with the passing of the Land Act and the relative appeasement of peasant farmers and smallholders, land ceased to be the issue it was, and Home Rule became the focus of Irish nationalist ambitions. It can thus be seen that there was a myriad of factors other than land which acted as obstructions to the resolution of the Irish Question, with arguably greater importance and obstructiveness than land issues. It appears that, although the issue of land was an indisputably huge issue which caused unparalleled unrest and violence from 1874-1886, it was eventually dealt with by Gladstone's Second Land Act halfway through the period, thereby being nullified as an obstruction to peace and the resolution of the 'Irish Question'. The long-term issues of Home Rule and the ineffectiveness of Disraeli and occasionally Gladstone were much larger obstacles to long term peace; after 1881, the resolution of the 'Irish Question' would only ever come about by addressing Home Rule and the attitude of politicians to Ireland, with Gladstone achieving the latter to some extent through the 'Hawarden Kite'. ?? ?? ?? ?? ...read more.

The student answers the question excellently. Most students know to present alternative interpretations to show they understand there is more than one opinion on the causes of all historical events. But this student takes it a step further by writing ...

The student answers the question excellently. Most students know to present alternative interpretations to show they understand there is more than one opinion on the causes of all historical events. But this student takes it a step further by writing things like "The interpretation that the issue of land was the greatest obstacle has much to commend it" - by saying that an interpretation has a lot of strengths, they are showing they have the knowledge and understanding to judge one interpretation to be better than another. The essay stays on task and focused the whole way through, which is good because it shows the student has enough knowledge to answer the question.

The student gets the balance between giving details of an event and explaining why it happened or what the effects were - at the end of the the second paragraph, the student describes how Parnell created friction, and weaker students would stop there, which is bad as anyone can remember a few details. But this student goes on to explain that it was significant and it stopped the achievement of peace, which shows they have a developed knowledge and understanding. The essay uses a good range of evidence, especially precise dates - such as "the 1881 Land Act" - which shows that the student has a detailed knowledge of the period and isn't just saying "the Land Act of the early 1880s", which sounds vague and general. The essay would benefit from heavier use of statistics: when the student says "unparalleled unrest and violence", it would have been useful to perhaps add in the number of riots in the period, if that information was available. This would have shown the student knows what actually makes violence "unparalleled" - the lack of a statistic suggests they are just saying it was unparalleled without being sure what makes it that way. The conclusion to the essay is very good as it points out both short term and long term reasons: this tells the examiner the student has enough knowledge to explain why one was sudden and one happened over time. This knowledge may have come from wider reading, which improves marks at A Level because teachers don't teach all the relevant information as they do at GCSE: look online or in books for a few extra facts about each area of your syllabus, and don't be afraid to drop them in when it's relevant, as it will make you stand out as someone who is thinking widely about the subject.

A particularly good feature of this essay is the use of phrases like "Gladstone's policy could be seen as...". Examiners look for you to be tentative, which means you don't say things for certain, but understand that things can't be explained by one essay and may have many causes. The spelling, grammar and punctuation are excellent, leading to an essay that is easy to read and understand. The essay also benefits from using words such as "cause": the student says "similar Ã¢â‚¬Ëœknife and forkÃ¢â‚¬â„¢ issues...caused great Irish unrest", which is good because it shows a crystal clear understanding of the link between the issues and the unrest. There is very little this student could do to improve the quality of their writing.