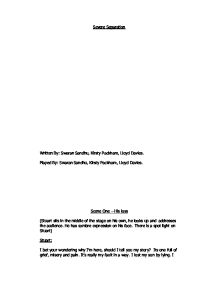 a play for drama

Severe Separation Written By: Swaran Sandhu, Kirsty Packham, Lloyd Davies. Played By: Swaran Sandhu, Kirsty Packham, Lloyd Davies. Scene One - His loss (Stuart sits in the middle of the stage on his own, he looks up and addresses the audience. He has sombre expression on his face. There is a spot light on Stuart) Stuart: I bet your wondering why I'm here, should I tell you my story? Its one full of grief, misery and pain. It's really my fault in a way. I lost my son by lying. I thought I could get rid of her (starts to get angry) but I was wrong, she came back and ruined my life. I'm all by myself I've lost everything and its all because of her, my wife. End of scene Scene two - A departure (Stuart is sitting on the sofa on his own. Sandra walks through the door. Stuart looks up at her and then walks over to her) Stuart: Hey, welcome home honey. How was your night? (Notices something) W....what's that smell? Sandra: What the Fags? I went to a pub that's all. Stuart: No, you smell of ...... Aftershave, it's not mine, it's another type. ...read more.

It was terrible. James: Dad I would really like to no, it's really been eating at me. I've don't really remember her and it's just... Stuart: Well ok, she (little pause) she ... had cancer, she was ill for a really long time she died when you where really young. James: How come you haven't taken me to see her grave? (Looking shocked) Stuart: Its hard for me to talk about it , I just wont to get on with my life ok. James: But I won't to go. Stuart: I'll take you another time, I don't wont to talk about it. End of scene Scene four - Unexpected guest (Stuart and James walk across stage Sandra walks past them, Sandra and Stuart notice each other) Stuart: Let's just get home quickly son, before we miss the football. (Looking worried.) James: OK dad. (Gets to the front door.) Stuart: Hang on let me find my keys. (Looks around eerily, while racing to find keys . walks into house, Sandra comes onstage towards the house looks as though she's thinking whether or not to knock the door , but in the end she goes up to the house.) Sandra: So this is the right house! ...read more.

(They both walk of) Sandra: James I'm your mother. James: You're crazy, my mother died a long time ago. How could you possibly be my mother, don't be so disrespectful. (They both walk off) (Sandra looks around for help, and then pulls something from her pocket.) Sandra: James look I have pictures. James walks on against Stuart.) James: That's ... that's me ... and you together, when I'...... young. (Stuart freezes) It cant be my mums dead, I was tolled by my dad. (James and Sandra hug) I can't believe it after all this time. (Stuart thaws out and looks scared) Stuart: It's true; I did lie but only to keep you away from that cheating scum. James: But she's my mother, I don't care what she did to you , you kept her away from me all that time and brought me up in that crap you call a home...... I cant go back to that shack with you, I cant trust you know. What else could you be lying about Sandra: You can live with me... in safety and trust. Stuart: What no you can't leave me I'm your father you can't leave me (A brief struggle with James and Stuart starts, then ends with Stuart on the floor sobbing and Sandra and James leave together on the side.) The end. ?? ?? ?? ?? 2 ...read more.