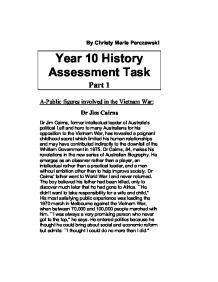 By Christy Marie Parczewski Year 10 History Assessment Task Part 1 A-Public figures involved in the Vietnam War: Dr Jim Cairns Dr Jim Cairns, former intellectual leader of Australia's political Left and hero to many Australians for his opposition to the Vietnam War, has revealed a poignant childhood secret which limited his human relationships and may have contributed indirectly to the downfall of the Whitlam Government in 1975. Dr Cairns, 84, makes his revelations in the new series of Australian Biography. He emerges as an observer rather than a player, an intellectual rather than a practical leader, and a man without ambition other than to help improve society. Dr Cairns' father went to World War I and never returned. The boy believed his father had been killed, only to discover much later that he had gone to Africa. ``He didn't want to take responsibility for a wife and child,'' His most satisfying public experience was leading the 1970 march in Melbourne against the Vietnam War, when between 70,000 and 100,000 people marched with him. ...read more.

Although Smith then ordered 12 Platoon around the side of the action, it, as well as headquarters, was soon under attack. An air support strike also failed because of the weather and low cloud and ammunition was running low. During the night the Viet Cong cleared many of their wounded and dead from the battlefield. A number of wounded Australians lay there all through the long terrifying night, as the Viet Cong moved around them. At first it was thought that the Australians had suffered heavy casualties as they had lost 17 men and 19 wounded, one third of its strength. Total casualties were 17 killed in action from D Company, one dead of wounds from 1st APC Squadron and 24 wounded. However, as daylight broke, it appeared that the Australians had an achieved a great victory as 245 enemy dead were discovered and many more wounded would have been taken away when the battle ended. ...read more.

This was the first poll to show less than 50 per cent approval for the government's policy, and all polls after August 1969 were to reveal a majority in favour of bringing the troops home. The ALP returned to the debate. In October during his policy speech for the 1969 federal elections, Whitlam declared that under a Labor Government there would be no Australian troops in Vietnam after June 1970. The Australian anti-war movement impressed by the success of an American moratorium on 15 October, held a national conference in Canberra on 25 November to organise a similar event. Coordinating organisations emerged in most capital cities, holding lead-up demonstrations on 15 December. Like its American prototype, the Australian moratorium attracted diverse and widespread support. As a prelude, large press advertisements appeared, with long lists of signatories. Occupational groups organised their own campaigns. The moratorium was to consist not only of the main marches but also of local activities. Women who had gained their organising experience in Save Our Sons, the student movement; some of the trade unions and the Australia Party were heavily involved. ...read more.