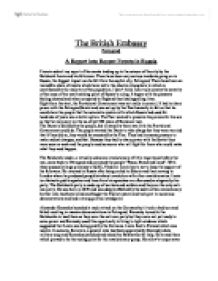 A Report into Recent Events in Russia.

The British Embassy Petrograd A Report into Recent Events in Russia I herein submit my report of the events leading up to the seizure of the city by the Bolshevik Lenin and his followers. There have been very serious incidents going on in Russia; the biggest impact can be felt from the capital city, Petrograd. There have been an incredible chain of events which have led to the chaotic atmosphere to which is contributed by the majority of the population. I don't think I can truly convey the severity of the issue of the near breaking point of Russia's ruling. It began with the peasants feeling cheated and when compared to England they lead appalling lives. Right from the start, the Provisional Government was not really in control. It had to share power with the Petrograd Soviet and was set up by the Tsar basically to fail so that he could show his people that the autocratic system with which Russia had used for hundreds of years was a better option. ...read more.

With these unusually large promises to fulfill, Vladimir Lenin has to act to keep the support of his followers. He returned to Russia after being exiled to Siberia and then moving to London where he produced pamphlets about revolution with other revolutionaries. Lenin is a fantastic public speaker and lines from his speeches are often used as slogans by his party. The Bolshevik party is made up of workers and soldiers and they are the only anti-war party. He was born in 1870 and was deeply affected by the death of his revolutionary brother who had been killed and fought the Tsarist system and took part in numerous demonstrations and had a strong political standpoint. Alexander Kerensky launched a major attack on the Germans but it took a bad turn and failed resulting in massive demonstrations in Petrograd. ...read more.

The Bolsheviks had asserted themselves as the true authority, having seen the Duma as a poor attempt to try to lead, they know Russia needs a strong leadership. We, like many in Petrograd, thought that Kerensky would return with troops loyal to the Provisional Government but we were proved wrong as they knew the Bolsheviks could out-do them. So now the situation in Russia is that we have the Bolshevik party in control of Petrograd which being that the capital city puts them in a higher place than the Provisional Government as their influence can obviously now go much further across Russia. Things are interesting but very chaotic and uncertain. We do not know whether Kerensky will attempt to regain the Palace but it looks unlikely seeing as he has now done so already. The Bolsheviks are likely to go for total domination of Russia but time will tell if they hold onto their word and make Russia a fairer and better place for everyone. Signed: 15 November 1917 ...read more.