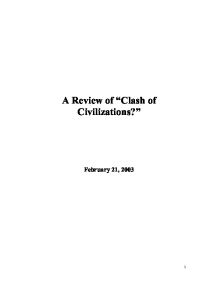 A Review of "Clash of Civilizations?" February 21, 2003 Introduction In the article, "The Clash of Civilizations?" Samuel P. Huntington begins this highly speculative argument by stating that the current and future conflicts in the world are going to be and currently are caused by differences between people or groups from different civilizations. He argues for a theory that "the most important conflicts of the future will occur along the cultural fault lines separating... civilizations from one another" (Huntington, 1993, p.25). He believes that since the end of the Cold War, ideological and economic answers are no longer enough, or even valid. He feels the principal actors are still the nation states, but they are influenced by more than just power and wealth. Other factors like cultural preferences, commonalties, and differences are also influential. Huntington explains that the most important classifications are not the three blocs of the Cold War, but rather the major world civilizations. He argues that in this new era as people identify themselves in terms of their ancestry and heritage, it will create a clash of civilizations. For the most part, it is a theory with which I agree. I do, however, question some of Huntington's components in his theory, as well as his classifications of civilization. ...read more.

The Beijing Olympics in 2008 may yet become the symbol of this transformation. Interestingly, a week after the World Trade Center was destroyed, China was admitted to the World Trade Organization. That same week, China's foreign minister met with Secretary of State Colin Powell for two hours, promising solidarity, diplomacy, and secret intelligence. "China is also a victim of terrorist attacks," the foreign minister said (Corson, 2001). Huntington pays special attention to the rise of Islamic civilizations because they are large, energetic, growing in power, and have asserted their superiority over Western culture. In the context of the West and Islam, he states that their conflicts "flow from the nature of the two religions and the civilizations based on them" (Huntington, 1996, pp.210-211). Thus, the "ongoing pattern of conflict" (Huntington, 1996, pp. 210-211) between the two civilizations comes from conflicts over the role of religion in politics. Even their similarities become sources of conflicts: their monotheism, which will not accommodate other gods; and their claims that contest the same territory. His thesis has the potential to be extremely dangerous if taken as a prescription for policy making. If the leadership of a major power (i.e., United States), were to accept this world-view and adopt and implement policies based upon it, countries belonging to other "civilizations" would be forced to take counter-measures. ...read more.

I feel as if this theory was a response to the growing tensions between the West and Islam over the past decade or so, and that response was merely a hasty and quick-tempered reaction to fear. In the past few centuries, the West has never experienced a real threat from outside civilizations. It basically has dominated the world in all possible ways and never had a serious danger posed to it by a non-Western force. But today, there exists a very real threat, and that which comes from Islamic extremists, a civilization that is on the opposite side of the spectrum in regards to politics, religion, and the like. The West has realized that any type of attack on Islam, whether it be militaristic or economic, usually is accompanied by repercussions of some sort. One only needs to look at the events of the last 5 years to see the threat that is very real. However, the conflict between the West and Islam does not necessarily mean that the future is going to be characterized by such conflicts between major civilizations. Many more factors need to be looked at, such as conflicts in political ideology, for they are much too important to be ignored. It's important that we analyze how these situations are dealt with and what will be done in the future to combat them so the world can be a peaceful environment. ...read more.