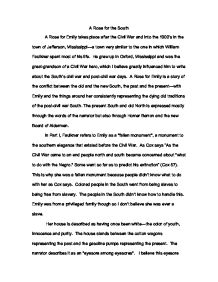 A Rose for the South.

A Rose for the South A Rose for Emily takes place after the Civil War and into the 1900's in the town of Jefferson, Mississippi-a town very similar to the one in which William Faulkner spent most of his life. He grew up in Oxford, Mississippi and was the great-grandson of a Civil War hero, which I believe greatly influenced him to write about the South's civil war and post-civil war days. A Rose for Emily is a story of the conflict between the old and the new South, the past and the present-with Emily and the things around her consistently representing the dying old traditions of the post-civil war South. The present South and old North is expressed mostly through the words of the narrator but also through Homer Barron and the new Board of Aldermen. In Part I, Faulkner refers to Emily as a "fallen monument", a monument to the southern elegance that existed before the Civil War. As Cox says "As the Civil War came to an end people north and south became concerned about "what to do with the Negro." Some went so far as to predict his extinction" (Cox 57). This is why she was a fallen monument because people didn't know what to do with her as Cox says. Colored people in the South went from being slaves to being free from slavery. ...read more.

She hangs onto him for three days after his passing and tells visitors that he is not dead. She finally breaks down and allows the body to be taken away for burial. I Morgan 3 believe this shows how the South, in general, is having a hard time letting go of the losses they suffered in the war - not just the battles, but the loss of their family members and the economic suffering felt during that time. The "only sign of life" in Emily's home after her father's death is the young Negro servant who gardens and cooks for her. In fact, it is apparent that Emily would have died years earlier if he had not taken care of her. To me, Faulkner is suggesting that the South will die, or certainly not progress, unless its culture changes and it accepts the Negro as a vital part of society. While Emily has been hiding in her house after her father's death, a construction company comes into Jefferson to pave the sidewalks, and the crew's boss begins courting her. He is Homer Barron, a Yankee, described as a big, dark man who drank with the young men (the new generation). Homer represents the Yankee attitudes of the time. But Faulkner also places Homer in a buggy with yellow wheels, and even though he carries a whip like Emily's father did, he wears yellow gloves. ...read more.

Morgan 5 When the authorities break into the locked upstairs room, they discover the skeleton of Homer Barron lying on the bed. The bedroom is decorated in rose, the color of blood, but everything is covered with dust. I believe that the rose pedals represent the blood that was shed by the soldiers of the North and South in the Civil War, which are represented by both Emily and Homer. The dust on top of the roses represents the battlegrounds today. The blood that was once there has been covered up by new soil because the war was so long ago. Just like when they find Emily and Homer dead in her house, they had been dead for a long time, like the soldiers of the war. The rose-colored room could also represent optimism. Perhaps Faulkner is suggesting that the old attitudes of both the North and the South must die in order for the two to be one. This is supported by the fact that the old Negro servant disappears upon Emily's death and after the new generation has entered the house. Faulkner's play on words throughout this story depict conflict of the old and new South. Emily definitely represented the dying old traditions of the post-civil war South. Only after her death did the "new generation" begin to prosper and change. ...read more.