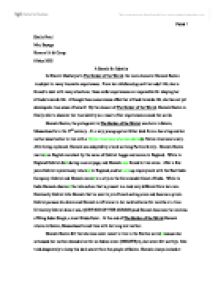 Shalin Patel Mrs. Sayago Honors Lit & Comp 8 May 2002 A Search for Identity In Bharati Mukherjee's The Holder of the World, the main character Hannah Easton is subject to many traumatic experiences. From her childhood up until her adult life, she is forced to deal with many situations; these awful experiences are responsible for shaping her attitude towards life. Although these occurrences affect her attitude towards life, she has not yet developed a true sense of herself. By the closure of The Holder of the World, Hannah Easton is finally able to discover her true identity as a result of her experiences around the world. Hannah Easton, the protagonist in The Holder of the World, was born in Salem, Massachusetts in the 17th century. At a very young age her father died from a bee sting and her mother deserted her to live with a Native American who she adored(a Native American lover). After being orphaned, Hannah was adopted by a hard working Puritan family. Hannah Easton married an English merchant by the name of Gabriel Legge and moves to England. While in England Gabriel died during a sea voyage, and Hannah was forced to live alone. ...read more.

THIS QUOTE END?)"...Hannah polished her correspondence, observed the world that passed outside her cottage, tended her garden, content, too, with the harmonious arrangement of houses and gardens all around her and with the tidiness of the meadows and the shallow placidity of the little ponds just beyond-and fell, briefly in love (78). This attitude of contentment departed with the death of Gabriel. The affect is monumentous upon Hannah, "She confined herself to the bleak society of her fellow Stepney brides..." (Mukherjee 79). Hannah goes on to withdraw completely from society (Mukherjee 79)(WHERE IS THE QUOTE<YOUR HAVE THE PG NUMBER). Hannah's feeling of contentment in England was short lived. As stated earlier Gabriel returns to England after being,(<DON'T NEED COMMA I THINK) "Swallowed by a whale of Grand Comoro and deposited on the Portugee shore" (Mukherjee 87). After Gabriel's sudden return to England, he joins the East India Company and Hannah leaves for India. Hannah is bewildered by this odd customs she encounters on the Coromandel Coast. She has a particularly hard time accepting the fact that the English men casually have affairs with local women called bibis. This odd factor is responsible for her questioning of the English society. ...read more.

(Mukherjee, Bharati). K. Appiah Anthony speak of Hannah as a "... a woman whose triumph is one of courage, unyielding passion, of the obstinate will to survive" (Appiah, K.). Hannah Easton's courage shapes her discovery of identity. "Mukherjee's focus continues to be an immigrant women and their freedom form relationships to become individuals" (Bharati-Emory). This is what occurs in the Holder of the World, Hannah Easton discovers herself by the end of this novel as a result of her travels around the globe. Her relationship with the various people she meets affects the way she looks at life. She observes other peoples trials and tribulations and then examines her own. Hannah Easton leads an extraordinary life and her experiences in New England , England and India all work to help her answer the question-Who is she and what has she done to make her life worthwhile? Hannah Easton leads an extraordinary life of courage, passion, and will power. She finds herself by combining these three vital aspects. At the commencement of this book Hannah was just a young girl ashamed of her past and her heritage by the end she is a grown women who accepts her life and develops a sense of identity as well as courage. ...read more.