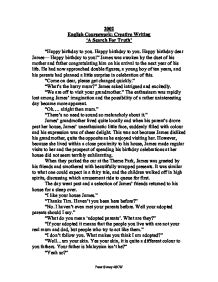 'A Search For Truth'.

2002 English Coursework: Creative Writing 'A Search For Truth' "Happy birthday to you. Happy birthday to you. Happy birthday dear James? Happy birthday to you!" James was awoken by the duet of his mother and father congratulating him on his arrival to the next year of his life. He had now approached double figures, a young boy of ten years, and his parents had planned a little surprise in celebration of this. "Come on dear, please get changed quickly." "What's the hurry mum?" James asked intrigued and excitedly. "We are off to visit your grandmother." The enthusiasm was rapidly lost among James' imagination and the possibility of a rather uninteresting day became more apparent. "Oh.... alright then mum." "There's no need to sound so melancholy about it." James' grandmother lived quite locally and when his parent's drove past her house, James' unenthusiastic little face, suddenly filled with colour and his expression was of sheer delight. This was not because James disliked his grandmother, quite the opposite as he enjoyed visiting her. ...read more.

Your father is Malaysian isn't he?" "Yeah so?" "Well you should have darker skin then if you are half Malaysian." "Suppose so." The mystifying conversation (for James especially) was then interrupted by his mother who asked, "Who would like some ice-cream?" Due to everyone loving ice-cream, the conversation appeared to vanish from the minds of the children almost immediately. The remainder of the night was spent watching videos and they steered clear from any type of thought provoking conversation. One by one the children fell into a deep sleep whilst watching the videos at such a late hour. As the clock chimed for the first hour of morning the only person remaining awake within the house was James. Frustratingly for him the words, "Well your adopted parents should I say," were amply circulating his mind like the earth never seizes to stop encircling the sun. He was unable to comprehend the thought of being adopted not realising it. He eventually came to the conclusion that the only sensible option was to seek the truth and confront his parents upon the matter. ...read more.

The program continue as, "As the biological parents of these fascinating young lizards sadly passed away, they have been taken to the National Lizard Park in London; where they have been paired to a couple of adult lizards who will take on the role of acting as the lizards parents." James' face became very pale as the terrible thought that his real parents might be dead crossed his mind. That would explain why the parents that he was living with were of different appearance to himself. This was the perfect opportunity to introduce the subject of adoption as his parents were also watching the program and it would not seem particularly random or odd to discuss the issue at this moment. However James could not bring himself to do so as he now had the even more terrifying thought that, if he was adopted, his biological parents could be dead. All night he lay awake hoping that if he was adopted, it was for a reason other than the death of his parents. The very next morning he was insistent on knowing if his parent were still alive. Peter Simey 4SCW ...read more.