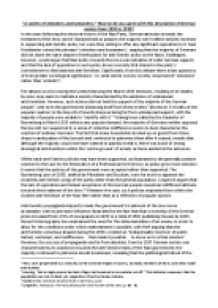 &quot;A society of onlookers and bystanders. How far do you agree with this description of German society from 1933 to 1939?

﻿"A society of onlookers and bystanders.? How far do you agree with this description of German society from 1933 to 1939? In the years following the electoral victory of the Nazi Party, German attitudes towards the treatment of the Jews can be characterised as passive; the majority were neither actively involved in supporting anti-Semitic policy nor were they willing to offer any significant opposition to it. Saul Friedlander coined the phrased ?onlookers and bystanders?, arguing that the majority of Germans did not share the same degree of enthusiasm for anti-Semitic policy as the Nazis. Goldhagen, however, would argue that Nazi policy towards the Jews was indicative of wider German support, and that the lack of opposition to such policy shows a society that shared in the party?s commitment to eliminationist anti-Semitism. Significantly, from this debate there arises questions of even greater sociological significance ? to what extent is every society comprised of ?onlookers? rather than ?activists?? The attacks on Jews during the weeks following the March 1933 elections, resulting in 40 deaths by June, may seem to indicate a society characterised by the existence of widespread anti-Semitism. However, such actions did not hold the support of the majority of the German people,[1] with even the government distancing itself from these ...read more.

committed by ordinary Germans who had ?lived, worked, given birth, and buried parents, side by side with them?.[6] Increasing hostility towards the Jews, culminating with Kristallnacht in November 1938, is seen by Goldhagen as revealing the spontaneous nature of actions taken against the Jews. Although the brutality of the original SA perpetrators had been orchestrated by higher party officials, principally Goebbels, many Germans "availed themselves of the opportunity to join the assault on the Jews",[7] and "without provocation or encouragement, participated in the brutalities".[8] Kater has criticised recent historiography that has ?overemphasised the degree of high-level Nazi management,?[9] with Goldhagen suggesting that the actions on Kristallnacht represent the existence of wider societal support for action against the Jews. Although there was no significant opposition to the actions of the Nazis on Kristallnacht,[10] the attitude of the majority of Germans was one of widespread indifference rather than active support. Far from taking part in the violence, the majority of Germans were not involved in the looting and destruction of Jewish property, with one eyewitness account saying, ??the state of indignation that would lead to such excess... was non-existent.?[11] Erich Johnson points out that had such violence been characteristic of the entire population more Jews would have decided to leave Germany than did ...read more.

[3] Norbert Frei, National Socialist Rule in Germany, p.47. [4] Longerich, Holocaust: The Nazi persecution and murder of the Jews, p. 60 - 61 [5] Daniel Jonah Goldhagen, Hitler?s Willing Executioners, p. 90. "Here was the sight of the German volk, organised by the German state, collectively boycotting an entire German group of German citizens" [6] Ibid. p. 94 [7] Ibid. p. 100 [8] Ibid. p. 101 [9] M. H. Kater, Everyday Anti-Semitism in Pre-War Nazi Germany: The Popular Basis [10] Any disgruntlement came predominantly from the wasteful destruction of millions of Reichsmarks worth of property rather than due to ideological objections. [11] Ronnie Landau, Studying the Holocaust, p.63. From the American consul in Leipzig. [12] Eric Johnson, The Nazi Terror: Gestapo, Jews, and Ordinary German, p.140 ?? had the bloodthirsty SA and SS bullies and zealous anti-Semitic Nazi party members been characteristic of the German population, more Jews might have made the decision to leave before it was too late.? [13] http://www.thirteen.org/openmind/foreign-affairs/hitlers-willing-executioners-part-i/563/ ?Individual Germans in Germany could have done little to prevent what happened but if millions of Germans had been opposed to the persecution of the Jews in the 1930s? then they could have done something?? [14] Ian Kershaw, Hitler, the Germans, and the Final Solution, p.199 [15] http://heroicimagination.org/public-resources/social-influence-forces/bystander-effect-and-diffusion/ ...read more.