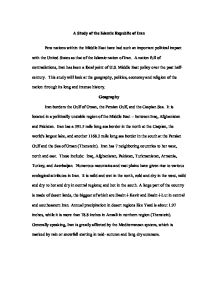 A Study of the Islamic Republic of Iran.

A Study of the Islamic Republic of Iran Few nations within the Middle East have had such an important political impact with the United States as that of the Islamic nation of Iran. A nation full of contradictions, Iran has been a focal point of U.S. Middle East policy over the past half-century. This study will look at the geography, politics, economy and religion of the nation through its long and intense history. Geography Iran borders the Gulf of Oman, the Persian Gulf, and the Caspian Sea. It is located in a politically unstable region of the Middle East -- between Iraq, Afghanistan and Pakistan. Iran has a 391.5 mile long sea border in the north at the Caspian, the world's largest lake, and another 1168.2 mile long sea border in the south at the Persian Gulf and the Sea of Oman (Thenstein). Iran has 7 neighboring countries to her west, north and east. These include: Iraq, Afghanistan, Pakistan, Turkmenistan, Armenia, Turkey, and Azerbaijan. Numerous mountains and vast plains have given rise to various ecological attributes in Iran. It is mild and wet in the north, cold and dry in the west, mild and dry to hot and dry in central regions; and hot in the south. A large part of the country is made of desert lands, the biggest of which are Dasht-i-Kavir and Dasht-i-Lut in central and southeastern Iran. Annual precipitation in desert regions like Yazd is about 1.97 inches, while it is more than 78.8 inches in Anzali in northern region (Thenstein). ...read more.

When Soviet troops remained in Iran following the 1946 expiration of a wartime treaty that also allowed the presence of American and British troops, Iran protested to the United Nations. The Soviets finally withdrew in May of 1946, after receiving a promise of oil concessions from Iran subject to approval by the parliament. The Soviet-established governments in the north, lacking popular support, were deposed by Iranian troops late in 1946, and the parliament subsequently rejected the oil concessions (Metz, 228). In 1951, the National Front movement, headed by Premier Mussadegh, a militant nationalist, forced the parliament to nationalize the oil industry and form the National Iranian Oil Company (NIOC). Although a British blockade led to the virtual collapse of the oil industry and serious internal economic troubles, Mussadegh continued his nationalization policy. Openly opposed by the shah, Mussadegh was ousted in 1952 but quickly regained power. The shah fled Iran but returned when monarchist elements forced Mussadegh from office in August of 1953. Covert U.S. activity was largely responsible for Mussadegh's ousting. In 1954, Iran allowed an international consortium of British, American, French, and Dutch oil companies to operate its oil facilities, with profits shared equally between Iran and the consortium. After 1953, a succession of premiers restored a measure of order to Iran. In 1957, martial law was ended after being in force for over 16 years. Iran established closer relations with the West, joining the Baghdad Pact (later called the Central Treaty Organization). ...read more.

Several European Union countries began renewing economic ties with Iran in the late 1990s. However, the United States continued to block more normalized relations, arguing that the country had been implicated in international terrorism and was developing a nuclear weapons capacity (Thenstein). 9/11 and the Second Gulf War Following the September 11, 2001 terrorist attacks in New York, Washington and Pennsylvania, relations with Iran were further strained. Public opinion implicated Iran as being a possible source of co-conspiracy. President Bush also implicated Iran as being part of an "axis of evil" that was harmful to the welfare of the United States (Thenstein). Due to intense bad relations between the two countries, Iran was very vocally opposed to the 2003 U.S. led invasion of Iraq. The purpose of the invasion was to remove the regime of dictator Saddam Hussein. Although Iran has consistently stood opposed to Saddam Hussein's regime, it still was loud in its opposition. Part of the reasoning behind this lack of support was due to Iranian fears that their nation could be next on the western coalition's plans (Thenstein). The Future of Iran/U.S. Relations It is yet to be seen how the relationship between the two nations will fare in the future. There is a strong push toward representative democracy among Iran's youth. Iranians today are shifting from militant Islam toward a more open relationship with the west. Perhaps a strong relationship between the two nations can be forged in the near future. Figure 2: Map of Iran Source: Thenstein Figure 3 Flag of Iran Source: Thenstein 2 ...read more.