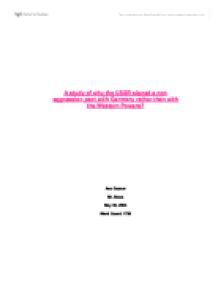 A study of why the USSR signed a non aggression pact with Germany rather than with the Western Powers?

A study of why the USSR signed a non aggression pact with Germany rather than with the Western Powers? Ana Gosnar Mr. Rowe May 30, 2004 Word Count: 1798 CONTENTS: A. Plan of investigation Page 3 B. Summary of Evidence Page 3-4 C. Evaluation of Sources Page 5 D. Analysis Page 5-6 E. Conclusion Page 7 F. List of Sources Page 8 A study of why the USSR signed a non-aggression pact with Germany rather than with the Western Powers? A Plan of the investigation This investigation will try to establish why Stalin signed a non-aggression pact with Hitler rather than with the Western powers. In the main body of this historical investigation it will be discussed why Stalin signed the pact with Hitler, with Germany's and USSR's specific aims stated, and why and where they originated. Also discussed will be the events occurring prior to the signing of the non-aggression pact, with specific emphasis on the League of Nations, the Treaty of Versailles and The Munich conference. The previous foreign relations between the USSR and Germany and the USSR and other European countries will also be conveyed. B Summary of evidence Soviet foreign policy wanted to build a system of alliances which would end the USSR's isolation from the world. Stalin feared that Germany would be pulled in an alliance against Soviet Russia with the Western Powers.1 His fear increased when Germany joined ...read more.

The book mostly concentrates on what the pact led to in relation to the Baltic States. The reason this book was valuable was because it shows how other countries saw the pact between Russia and Germany. Its limitations might include that it is written by a Latvian author, so some events are written from a Latvian point of view. Grey Ian (1982). Stalin -Man of Steel. Great Britain: Cox & Wyman Ltd. This book is written by a British author Ian Grey, I understand that this is one the best bibliography's about Stalin written by a non communist. This book's main advantage was that it had a section between the wars, where it described Stalin's and the USSR's views on Russia and how it affected the world. Even though the book was concentrating on Stalin, most of the important events and names were mentioned. Some limitations that are noticeable are that the author is biased, in some cases, and also that the book doesn't give all the detail of some of the important events that happened. D Analysis The USSR and Germany were the most unlikely countries to enter into a pact of any sort that one can imagine at the time. During the 1930's Hitler had made no secrets of his racial contempt for the Slavs, his political contempt of Bolshevism and his ideas of territorial expansion into the USSR to create 'Lebensraum' for the master race of Aryans. ...read more.