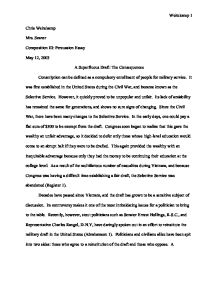 A Superfluous Draft: The Consequences.

Chris Weitekamp Mrs. Seaver Composition III: Persuasion Essay May 12, 2003 A Superfluous Draft: The Consequences Conscription can be defined as a compulsory enrollment of people for military service. It was first established in the United States during the Civil War, and became known as the Selective Service. However, it quickly proved to be unpopular and unfair. Its lack of amiability has remained the same for generations, and shows no sure signs of changing. Since the Civil War, there have been many changes to the Selective Service. In the early days, one could pay a flat sum of $300 to be exempt from the draft. Congress soon began to realize that this gave the wealthy an unfair advantage, so it decided to defer only those whose high-level education would come to an abrupt halt if they were to be drafted. This again provided the wealthy with an inequitable advantage because only they had the money to be continuing their education at the college level. As a result of the multifarious number of casualties during Vietnam, and because Congress was having a difficult time establishing a fair draft, the Selective Service was abandoned (Register 1). ...read more.

Studies done during Vietnam and other wars suggest that in general, draftees have had performed at a less professional level than those who were recruited. A majority of the soldiers killed during Vietnam were untrained, unprofessional, unmotivated draftees. For many recruited soldiers, morale can be low during times of war; for nearly all drafted soldiers, the morale is even lower because they never wanted to be there in the first place. People tend to be lazy and careless when they are unwillingly doing a job. This is how devastating military mistakes can occur, costing the lives of allies. When people are forced to do something against their will, there is always that risk that they may not perform at their fullest potential (Nimmo 1-5). Another risk that arises when people are forced into a grind is a revolt against their leaders. This concept known as fragging occurs all too often in times of war. Kurt Nimmo, a photographer and multimedia developer in Las Cruces, New Mexico reminds the public that: "Last time young people were forced into the military meat grinder, many responded by fragging officers" (1). Over time, some military draftees can develop such a rage and disgust for being forced to participate in war that they take all of their anger out on other officers or generals. ...read more.

A draft should only be used under certain extenuating circumstances when the military is in a state of emergency due to a lack of troops (Register 1). A draft should certainly not be taken lightly. It is a serious issue, and it needs to be looked at and studied very seriously before any final decision can be made. It should serve as a last resort in a time of national emergency. It is currently being wrongly used by Charles Rangel to serve as a political point. Rangel feels that minorities make up an unfair percentage of the total number of military personnel (Abrahamson 1). Most of these minorities are actually happy to serve their country and are content with their benefits and job security. For many of them, participating in the Armed Forces is exactly what they want to be doing and they do not feel misrepresented. So far, Congress has not been impressed with the weak reasons to reinstitute the draft. For now at least, a draft seems highly unlikely (Diller 1). As the US military continues to fight in this ongoing war on terrorism, it may sooner or later need to call upon civilians to serve. However, until then the military should not jump to conclusions or take preemptive actions. Weitekamp 1 ...read more.