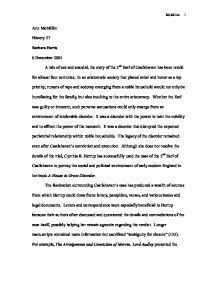 A tale of sex and scandal, the story of the 2nd Earl of Castlehaven.

Ann McMillin History 27 Barbara Harris 6 December 2001 A tale of sex and scandal, the story of the 2nd Earl of Castlehaven has been retold for almost four centuries. In an aristocratic society that placed order and honor as a top priority, rumors of rape and sodomy emerging from a noble household would not only be humiliating for the family, but also insulting to the entire aristocracy. Whether the Earl was guilty or innocent, such perverse accusations could only emerge from an environment of intolerable disorder. It was a disorder with the power to taint the nobility and to affront the power of the monarch. It was a disorder that disrupted the expected patriarchal relationship within noble households. The legacy of the disorder remained even after Castlehaven's conviction and execution. Although she does not resolve the details of the trial, Cynthia B. Herrup has successfully used the case of the 2nd Earl of Castlehaven to portray the social and political environment of early modern England in her book A House in Gross Disorder. The fascination surrounding Castlehaven's case has produced a wealth of sources from which Herrup could draw from: letters, pamphlets, verses, and various books and legal documents. ...read more.

Castlehaven even threatened that a conviction would put his peers in danger of conspiracy by setting a bad precedent and so "by acquitting him, the peers could uphold patriarchy, piety, and honor" (86). The Earl made many valid points but his claims of conspiracy were as disturbing as the refutation of rape and sodomy. By victimizing himself, Castlehaven proved that he failed in proper household governance. "If the jurors believed the realm's officials, a decisive guilty verdict would renaturalize patriarchal governance, reaffirming its power to protect subordinates from internal as well as external threats," writes Herrup (86). It did not matter that testimony was given from inferiors; the Earl condemned himself. His own defense could be used against him because it showed he had allowed an environment in his household that bred hostility and rebellion. Although Castlehaven was ultimately convicted, the fact that the jurors ignored his warnings of the dangers of conspiracy is interesting. Perhaps, by believing Castlehaven they would be admitting to their own vulnerability as heads of households and, on a larger scale, the weakness of patriarchal governance - an admittance that would be unacceptable. Therefore, based on the testimonies of women and servants, in a legally unsound courtroom, the 2nd Earl of Castlehaven was convicted of the refutable charges of rape and sodomy. ...read more.

It is interesting to note, "There is a clear duplication between the dissenting jurors and those who eventually took arms against the king." With the benefit of hindsight, it could be said that the trial was a slight forecast for the eventual total dissatisfaction with the monarch, leading to Civil War. Although the accusations were rape and sodomy, Castlehaven's guilt was also clearly political. By avoiding the automatic assumption of Castlehaven's guilt, Cynthia B. Herrup looks beyond the accusations of rape and sodomy to "see the enforcement of law for what it is - a forum for cultural interaction" (6). In doing this, she has presented the reader with a social and political environment in which both the aristocracy and monarchy have something to lose through Castlehaven's acquittal, making his ambiguous guilt seem certain. The aristocracy refuses to forfeit their honor or give in to the terrifying disorder that plagued the Earl. They can further display their repulsion for Irishness and Catholicism. The king can symbolically prove that one bad apple doesn't ruin a harvest; he is still effectively ruling by example. Herrup has successfully used a trial of sexual scandal to provide insight into a tumultuous segment of early modern English history. 1 McMillin ...read more.