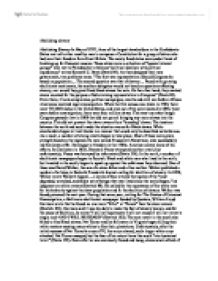 Abolishing slavery Abolishing Slavery In May of 1787, three of the largest slaveholders in the Confederate States met with other wealthy men to compose a Constitution for a group of states who had won their freedom from Great Britain. The newly freed states were under threat of breaking up for financial reasons. These states were a collection of "special interest groups" who met in Philadelphia to balance "political idealism with political expediency," writes Kenneth C. Davis (Davis 85). As they designed their new government, two problems arose. "The first was representation. Should Congress be based on population.... The second question was that of slavery.... Faced with growing abolitionist sentiments, the southern delegates would not bend on questions affecting slavery, nor would they grant freed black slaves the vote. On the other hand, they wanted slaves counted for the purpose of determining representation in Congress" (Davis 86). From there, it took compromise, political campaigns, revolts and civil war before African Americans received legal emancipation. When the first census was taken in 1790, there were 757,000 blacks in the United States, and nine out of ten were slaves-by 1860, three years before emancipation, there were four million slaves. ...read more.

This began a system of bounty hunting where freed slaves required an Affidavit verifying their free status (Davis 149-151). However, the system only served to enslave emancipated and runaway slaves. One of the first to challenge this law in the courts was Dred Scott, whose white master had died and left him in a northern state. Scott's owner had stated to him that he was free upon his death, but Scott did not have the paperwork to prove it. In 1857 the Supreme Court ruled that Scott had no residence rights in the free state in which his master had died and left him. The court stated that slavery could not be prohibited in free states, and therefore, Scott was not free and had to be handed over as part of the dead owner's estate (Davis 158). This decision divided north and south even more. The thought of a divided America was unreasonable to many of the political leaders, whose job it was to keep the states united. One hundred years after the signing of the Declaration of Independence, the United States was in danger of separating over the slave issue. Not only were Americans blind to this fact, wrote Garrison, but they also were becoming unemotional to the whole condition of slavery. ...read more.

(Ravitch 115). Douglass also raised the question, why has this issue not been resolved? Abraham Lincoln agreed with him. In 1858, Lincoln expressed his concern for the divided nation and his impatience with the Senate for its ineffectiveness in passing the legislation that he believed could save the country. If an antislavery bill was not passed soon, he foresaw the destruction of the United States. In his speech to the Senate, Lincoln spoke his famous words, "a house divided against itself cannot stand" (Ravitch 119). Lincoln challenged Senator Stephen Douglas to a number of public debates during his campaign for the presidency. In the most famous of those debates, on October 15, 1858, Douglas claimed Lincoln's statement that "negro equality was an inalienable right" to be false. Douglas also refuted the divine right of freedom. Lincoln called slavery morally, socially and politically wrong, and argued that slavery was the only issue that could destroy the country. For that reason alone, he said slavery should be abolished (Ravitch 126). Lincoln won the election, proving that slavery was held to be wrong by the voting citizens of the United States. However, the issue was not resolved. The south seceded from the union, and it was only after a bloody Civil War that Abraham Lincoln was able to issue the Emancipation Proclamation, effective January 1, 1863, freeing the slaves. ...read more.