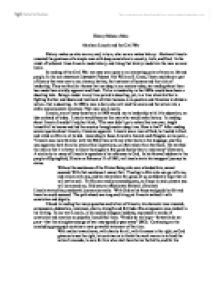 Abraham Lincoln and the Civil War

History Makes a Man: Abraham Lincoln and the Civil War-I like your title. It reveals topic and stance easil History makes us who we are, and, in turn, who we are makes history. Abraham Lincoln revealed the greatness of a simple man with deep conviction to country, truth, and God. In the midst of turbulent times Lincoln made history, and living that history made him the man we now know. In reading of the Civil War my eyes were open to an interesting point of view on life and people. In the text American Literature Volume 1 by William E. Crane, I have read about a part of history that was new to me: slavery, battles, the treatment of humans and the trials of leadership. They are familiar themes that run deep in our society today, yet reading about them has made them vividly apparent and fresh. To be in leadership in the 1800s would have been a daunting task. Being a leader in any time period is daunting, yet, in a time when brother is fighting brother and ideals and treatment of other humans is in question and threatens to divide a nation--that is daunting. ...read more.

With God as his focus and guide he felt and knew he could succeed. The path ahead was long and tiring yet Lincoln walked it with conviction and dignity. I found in reading the many speeches and letters of Lincoln, his character was revealed, compassion, dedication, reverence, charm, strength and fortitude. His compassion was evident in his writing. In our text Lincoln, in his second inaugural address, expressed in words of conviction and emotion so palpable I could feel them. "Fondly do we hope-fervently do we pray-that this almighty scourge of war may speedily pass away" (862). Continuing on the concluding paragraph contains a most powerful statement of the time: With malice toward none; with charity for all; with firmness in the right, as God gives us to see the right, let us strive on to finish the work we are in to bind the nation's wounds; to care for him who shall have borne the battle, and for his widow, and his orphan-to do all which may achieve and cherish just and lasting peace, among ourselves and with all nations. ...read more.

Lincoln was the central figure of our age, and on him were concentrated the love, the faith, the reverence, the hate, the fear and the calumny, of half the civilized world. The 'plain people' understood him better than did the politicians; and he in turn had a wonderful perception of the real condition of the popular heart and will. (Internet) As stated in White House Sketches by William O. Stoddard the above quote leads me to see the great man Lincoln was and how history not only made him great but how he made history. Turbulent times can often call for turbulent measures: A war between brothers, within a nation, a union, North and South over the issue of humanity. In these turbulent times, a great man would arise to lead and direct a nation, under God, into an era of change. Lincoln was this man. In reading and researching the Civil War and the people involved I have been made aware of the continued conflict of slavery, even today. Lincoln lived in a time of changing history, a history in which he made change, by remaining true, faithful and strong, to his beliefs, to his people and to his country. History does make us who we are and we in turn can make history. ...read more.