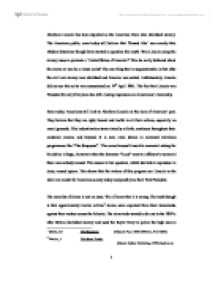 Abraham Lincoln has been depicted as the American Hero who abolished slavery.

Abraham Lincoln has been depicted as the American Hero who abolished slavery. The American public, even today still believe that 'Honest Abe' was exactly that. Modern historians though have started to question this myth. Was Lincoln using the slavery issue to promote a 'United States of America'? Was he really bothered about the slaves or was he a closet racist? The one thing that is unquestionable is that after the civil war slavery was abolished and America was united. Unfortunately, Lincoln did not see this as he was assassinated on 14th April 1865. The fact that Lincoln was President for only five years has left a lasting impression on Americans' even today. Even today, Americans still look to Abraham Lincoln as the Icon of Americas' past. They believe that they are right, honest and lawful in all their actions, especially on moral grounds. This indoctrination starts virtually at birth, continues throughout their academic careers and beyond. It is now even shown in animated television programmes like "The Simpsons".1 The crowd around Lincoln's memorial asking for his advice is huge., however when the character "Lucy" went to Jefferson's memorial there was nobody around. The answer to her question, which she had to reproduce in class, caused uproar. This shows that the writers of this program see Lincoln as the ideal role model for American society today and possibly as their First President. ...read more.

This they cannot be to any extent, if slavery shall be planted with them. Slave states are the places for poor white people to move from...New Free states are the places for poor people to go and better their condition."6 This statement defined the Republican parties' views on slavery. It proved that the people that were against the expansion of slavery were protecting the 'white man' and not out of any concern for the 'black man'. Lincoln appeared to be a very pragmatic man with his dealings on slavery. In 1852 he delivered a eulogy to Henry Clay where he praised Clays' policies on the slave issue. In this eulogy Lincoln claimed that like himself, Clay had a "deep down devotion to the cause of human liberty"7 Even though Clay was a slave owner, he believed that to end slavery would cause greater problems than it would solve. It appears that Lincoln was playing both sides of the issue. On one hand saying that it is wrong to own slaves but on the other saying that it is not worth ending slavery. As Dilorenzo puts it, "...a clearer example of circular reasoning."8 There is no doubt that Lincoln was opposed to the abolitionists that wanted to grant immediate racial equality to the slaves. ...read more.

If I could save the Union without freeing any slave I would do it; and if I could save it by freeing some and leaving others alone I would also do that. What I do about slavery, and the colored race I do because I believe it helps to save the Union,..."13 This shows that Lincoln was willing to do anything to save the Union. It also reflects his thinking and attitude to the slaves. In fact, Lincoln does not really seem bothered what happens to them at all as long as the Union is saved. His emancipation proclamation shows his true feelings about slavery; they would remain slaves as long as their owners were loyal to the Union. Throughout his political career Lincoln does refer to the constitution, saying about equal rights for all men. Being a realist he keeps the issue of slavery at arms length. Yes he agrees that it is wrong, but also says that they cannot be the white mans equal. Even when he does free the slaves he manages it so that it does not affect the people that voted him into office. He does want to free the slaves as long as they leave America. Lincoln in a sense was right, even today there is not total equality throughout America. The first 'Black' President may well change that but until that time 'The Blacks' in some American eyes will always be second rate. ...read more.