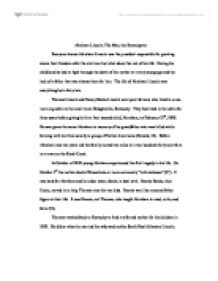 Abraham Lincoln: The Man, the Emancipator

Abraham Lincoln: The Man, the Emancipator Everyone knows Abraham Lincoln was the president responsible for granting slaves their freedom after the civil war but what about the rest of his life. During his childhood he had to fight through the death of his mother at a very young age and the lack of a father that was always there for him. The life of Abraham Lincoln was everything but a fairy tale. Thomas Lincoln and Nancy Hanks Lincoln were poor farmers who lived in a one-room log cabin in the small town Hodgenville, Kentucky. They had lived in the cabin for three years before giving birth to their second child, Abraham, on February 12th, 1809. He was given the name Abraham in memory of his grandfather who was killed while farming with his three sons by a group of Native Americans (Donald, 10). Before Abraham was two years old the family moved ten miles to a two hundred-thirty acre farm in a town on the Knob Creek. ...read more.

Five years later Lincoln was received his law license and was once again re-elected as member of the State Assembly as leader of the Whig Party (176). Lincoln began arguing cases in nine counties in the central part of the state. These occurrences, along with the next five to ten years were vital in the takeoff of Lincoln's political career. In those years he became Whig Floor Leader of the Illinois General Assembly, argued State Supreme Court cases, and not to mention married his twenty three year old girlfriend, Mary Todd. Now in 1846, and with three sons, Lincoln became a member of the United States House of Representatives as a member of the Whig Party (198). Lincoln spent many years between practicing law and having a United States Congressional Seat. He fought against actions like the Kansas-Nebraska Act of 1854, the Dred Scott Decision, and the War with Mexico. ...read more.

The question isn't what did Abraham Lincoln do to become a significant historical figure, it's what didn't Abraham Lincoln do to be considered a significant figure of United States history. Abraham was president during one of the nation's darkest times. The country was at war with itself. The war between the North and the South was inevitable but it took a man like Abraham Lincoln to bring the country through it. He possessed all of the political and psychological skills that one needed in the situation. The United States would not be the same today without Abraham Lincoln but was he only remembered because he was U.S. President during the Civil War? The answer to that is more than likely no. It was his extreme opposition to the institution of slavery that leads the South to secede from the Union and begin the Civil War. Whether it was the 1820's, 1860's, or 1960's the Civil War would have taken place. So did the time make Abraham Lincoln? Absolutely not. Abraham Lincoln was completely responsibly for today's remembrance of the decade of the 1860's. ...read more.