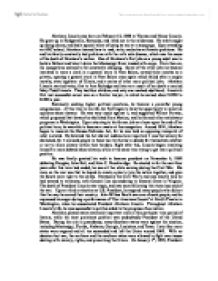 Abraham Lincoln was born on February 12, 1809 to Thomas and Nancy Lincoln. He grew up in Hodgenville, Kentucky

Abraham Lincoln was born on February 12, 1809 to Thomas and Nancy Lincoln. He grew up in Hodgenville, Kentucky, and lived out in the wilderness. He was brought up doing chores, and had a special talent of using an axe at a young age. Upon attending an ABC school, Abraham learned how to read, write, and solve arithmetic problems. He and his family constantly had problems with the milk sick disease, which was the cause of the death of Abraham's mother. One of Abraham's first jobs as a young adult was to build a flatboat and take it down the Mississippi River loaded with cargo. From then on, his occupations seemed to be constantly changing. Some of the other jobs he became involved in were a clerk in a general store in New Salem, served three months as a private, opening a general store in New Salem once again which failed after a couple months, state legislator of Illinois, and a series of other more political jobs. ...read more.

His view on the war was that he hoped to create a plan to join the nation together, and give the South more right to the slaves. Eventually the Civil War's end was exactly how he had wanted to terminate, with General Lee surrendering to General Grant in Virginia. The death of President Lincoln was tragic, and was soon following this victorious end of the war. Upon a third re-election as U.S. President, he angered many people who did not like the way he served their country. John Wilkes Booth was one of such people, and he expressed his anger during a performance of "Our American Cousin" at Ford's Theatre in Washington, when he assassinated President Abraham Lincoln. Throughout Abraham Lincoln's life, he was successful in politics aided in the progress of our nation. Abraham played many extremely important roles in this particular time period of history, while his most prominent position was undoubtedly President of the United States. ...read more.

He always put forth his efforts into ending wrongs and never giving into what is morally wrong. Because he was committed to preserving the Union no matter what the consequences were to himself, it was saved, and because of his patience, timing, calculations, and keenness at solving problems he was able to kill what was left of slavery. Through transforming the president's role as commander-in-chief and as chief executive of his nation into a more powerful position, presidents from his term in office on were granted supremacy over both the Congress and the courts. His perseverance as a person brought him to have such an influential remembrance of him today, as he started out as a poor boy brought up in the wilderness in a log cabin to obtaining the most revered position of the country in the White House. Although he ended a tragic death, America will never forget his efforts at making America a better place, and will always look towards him as the father of our country. ...read more.