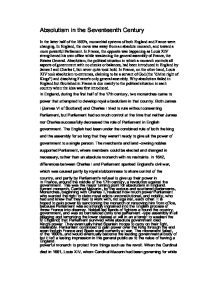 Absolutism in the Seventeenth Century

Absolutism in the Seventeenth Century In the latter half of the 1600's, monarchial systems of both England and France were changing. In England, the move was away from an absolute monarch, and toward a more powerful Parliament. In France, the opposite was happening as Louis XIV strengthened his own office while weakening the general assembly of France, the Estates General. Absolutism, the political situation in which a monarch controls all aspects of government with no checks or balances, had been introduced in England by James I and Charles I, but never quite took hold. In France, on the other hand, Louis XIV took absolutism to extremes, claiming to be a servant of God (the "divine right of Kings") and dissolving France's only general assembly. Why absolutism failed in England but flourished in France is due mainly to the political situation in each country when the idea was first introduced. ...read more.

Monarches, beginning with Charles II, realized how much power Parliament had and knew that they had to work with, not against, each other. It is because Parliament was so strongly ingrained into the English process of government, and was so centralized (only one parliament-type assembly in all of England) that Parliament survived while absolute government died miserably. Parliament continued to gain power over the King through the end of the 1600's, and would eventually become the leading governmental body of England. In France, around the middle of the 17th century, a revolution against the current monarch, Cardinal Mazarin, by the various and scattered parlements, who wanted the right to claim royal edicts unconstitutional, and nobility, who hoped to gain power by sanctioning the monarch or removing him from office, threw France into disarray. Nobles led bands of fighters around the country, pillaging and terrorizing the lower classes at will in an attempt to weaken the King's power. ...read more.

In this way, Louis XIV instigated an absolutism that was popular with the citizens of France, almost the opposite of England. It is because of the differing political systems in place within France and England that led to the acceptance of absolutism in France and its corresponding failure in England. In England, Parliament had had so much power for so long that it was unwilling to give it up, while in France, nothing comparable to Parliament existed to take power away from the monarch. In France, feudal lords fought against the King, while the public supported a strong head of government to keep the peace. In England, a majority of the people supported the Parliament, which had representatives from the middle and low classes, as well as the nobles, and served as a check to the King's power. Had the political institutions of France and England been similar, either a system of parliament or absolutism would have succeeded in both nations. ...read more.