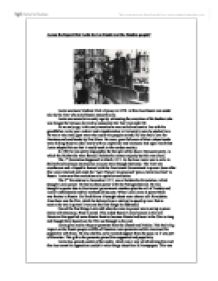 Access the impact that Lenin had on Russia and the Russian people?

Access the impact that Lenin had on Russia and the Russian people? Lenin was born Vladimir Ilich Ulyanov in 1870. At this time Russia was under rule by the Tsar who ruled Russia autocratically. Lenin was scared at an early age by witnessing the execution of his brother who was hanged for treason; he tried to assassinate the Tsar Alexander III. At an early age, in his early twenties he was exiled and sent to live with his grandfather, as he was a radical and a troublemaker at University were he studied Law. He was a very intelligent man who could win peoples minds. He also had a love for literature and read books by Karl Marx. He was a great follower of Marx whose books were talking about an ideal world with no capitalism and everyone had equal wealth but Lenin adapted this so that it would work in the modern society. In 1903 he was partly responsible for the split of the Social Democrat party, in which the Bolsheviks were formed. ...read more.

He also did this, as he wanted support from the poor, as it was part of Marxism. This gift to the peasants gained him supported and popularity. Lenin also gained control of the media, which was a way of advertising him and this also meant his opposition couldn't write things about him in Newspapers. This was after he clearly stated that everybody could write anything about anything in Newspapers in books but after only a week or so this changed, it was stopped. He believed that this was a way off controlling people's minds and it also meant that Newspapers couldn't make him a public enemy. He set up the secret police, the 'Cheka' that was his version of the Tsars 'Okrana'. He used this to control the Russia people and to create fear into Russia's society. Russia people were scared of this as neighbors could report each other if they fallen out. It relied heavily on torture for investigative purposes and detention. ...read more.

There was a big education policy, which offered free university courses to peasants children. Another thing he did to try and improve Russian peoples lives was the electrification program; Lenin believed 'soviet power plus electrification equals Communism' he tried to make sure that every village had access to electricity. He died in 1924 due to a number of strokes he recently had. Lenin had a great impact on Russia and Russian people. He was the main man behind the Communist revolution, which changed Russia for a long time after his death. He believed in Marxism and tried to alter the formulae to bring about revolution. He believed that he was doing the correct thing for Russia and its people in his attempt to make peoples lives better by creating an equal world. He claim revolution on the workers behalf and tried to make their lives better. He did make many peoples lives better in the way that he created a system where everyone was more equal and helped workers and peasants gain land and money. He also had a ruthless side to him but he generally made Russia a better place. ...read more.