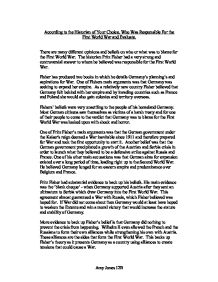 According to the Historian of Your Choice, Who Was Responsible For the First World War and Evaluate.

According to the Historian of Your Choice, Who Was Responsible For the First World War and Evaluate. There are many different opinions and beliefs on who or what was to blame for the First World War. The historian Fritz Fisher had a very strong and controversial answer to whom he believed was responsible for the First World War. Fisher has produced two books in which he details Germany's planning's and aspirations for War. One of Fishers main arguments was that Germany was seeking to expand her empire. As a relatively new country Fisher believed that Germany felt behind with her empire and by invading countries such as France and Poland she would also gain colonies and territory overseas. Fishers' beliefs were very unsettling to the people of his homeland Germany. Most German citizens saw themselves as victims of a harsh treaty and for one of their people to come to the verdict that Germany was to blame for the First World War was looked upon with shock and horror. ...read more.

More evidence to back up Fisher's belief is that Germany did nothing to prevent the crisis from happening. Wilhelm II even allowed the French and the Russians to form their own alliances while strengthening his own with Austria. These alliances are the sides that form the First World War. This backs up Fisher's theory as it presents Germany as a country using alliances to create tensions that could cause a War. Kaiser William also challenged Britain by increasing his naval programme. Britain was very proud of having the best navy in the world and actively building one to challenge it was seen as very provocative. This also supports Fisher as it shows that Germany was willing to challenge Britain and could have also been preparing her navy for the outbreak of War. Kaiser William was also provoking to the French when he made his Tangier speech where he said that he supported the independence of Morocco and demanded an international conference to discuss Morocco's future. ...read more.

I believe that to blame Germany alone would be unfair due to the particularly aggressive behaviour of Austria-Hungary and Russia. Germany was also but under a lot of pressure by French and Russian encirclement and could have been making alliances in her defence. I think that Germany was encouraging War between Austria and Serbia with hope to establish herself as a major European power. I think that it was possible that European powers could have been overly suspicious of Germany, which increased tension. To conclude I do not totally disagree with Fritz Fisher's proposals. I do believe that Germany was more to blame than other countries and that she was planning for War. I think that there were other causes of the First World War like the long-standing rivalry between Austria-Hungary and Russia due to their interests in the Balkans. It could even be said that the Russia and France alliance was provoking to Germany. However, I think that it is fair to say that Germany was welcome to the prospect of War so that she could prove herself and become a dominant European power. Amy Jones 12B ...read more.