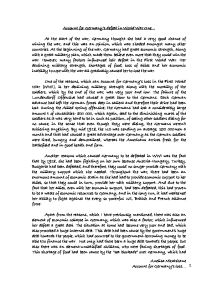 Account for Germany's defeat in World War One... At the start of the war, Germany thought she had a very good chance of wining the war, and this was an opinion, which was shaded amongst many other countries. At the beginning of the war, Germany had great economic strength, along with a great military plan, which made them believe even more that they could win the war. However, many factors influenced heir defeat in the First World War. Her declining military strength, shortages of food, loss of allies and her economic inability to cope with the war all gradually caused her to lose the war. One of the reasons, which can account for Germany's loss in the First World War (WWI), is her declining military strength along with the morality of the soldiers, which by the end of the war, was very poor and low. The failure of the Lundendorff Offensive had caused a great blow to the Germans. Each German advance had left the German forces deep in salient and therefore their drive had been lost. ...read more.

Apart from the reasons, which I have previously mentioned, there was also an element of economic collapse in Germany, which was also a factor, which influenced her defeat a great deal. The situation at home had become very poor and bad, which also provoked a huge internal debt. This debt had been cause by the government's huge debt towards the people, which had occurred to the government-borrowing money to be able t0o finance the war. Not only had there been a huge debt towards the people, but also there was an element-unsatisfied civilians, who were facing shortages of food. This shortage of food had been cause by the "sea blockade" over Germany, which had been imposed on her by Britain. Due to that limited amount of food, there had been installed a system of food-rationing, which meant that even the little food which was available to the country, it had been directed to the army, so that they could have something to eat, and be able to continue fighting. This o0bivouly caused a great amount of anger to the civilians involved, and this situation juts could not get any better for Germany because not only did she have problems in the battlefield, she also seemed to be facing domestic difficulties, and discontent. ...read more.

The government couldn't balance the need of the military of that of the society. The great influence of army official on politics proved to be a greater influence than that ever expected and it seemed to be a source of weakness in the German government. Another source of weakness was the ongoing conflict between the liberals and social democrats in the government, and theretofore, any decisions which were attempted to be made, always ended in huge arguments as neither side could agree with the other, causing ongoing conflict. By 1918, Germany was no longer as powerful, both militarily and economically as she was in the beginning of the war. The entrance of America into the war proved to be a great disadvantage to the Germans, which evidently led to the defeating of Germany by the Allies. As much as Germany would have liked to continue with the war, she wouldn't have been able to continue as; she was at a disadvantage both militarily and economically. Without these two factors, which probably play the most important role in winning wars, then Germany would definitely have a hard time defeating the other countries. 1 Anelisa Mkatshane Account for Germany's loss... ...read more.