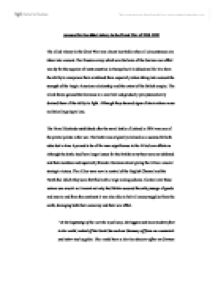 Account For The Allied Victory In The Great War Of 1914

Account for the allied victory in the Great War of 1914-1918 The allied victory in the Great War was almost inevitable when all circumstances are taken into account. The Prussian army which was the basis of the German war effort was by far the superior of most countries in Europe but it is delusional for it to have the ability to overpower their combined force especially when taking into account the strength of the Anglo-American relationship and the extent of the British empire. The allied forces ground the Germans to a near halt and gradually yet systematically drained them of the ability to fight. Although they showed signs of strain where never realistically going to lose. The Naval Blockade established after the naval battle of Jutland in 1916 was one of the pivotal points in the war. The battle was originally claimed as a success for both sides but in time it proved to be of far more significance to the Allied war efforts as although the battle itself saw larger losses for the British navy they were not defeated and their numbers and superiority forced a German retreat giving the Allies a crucial strategic victory. The Allies were now in control of the English Channel and the North Sea which they soon fortified with a large mining scheme. Control over these waters was crucial as it meant not only had Britain secured the safe passage of goods and men to and from the continent it was also able to halt all enemy supplies from the north, damaging both their economy and their war effort. ...read more.

"The Germans had more to celebrate. Russia had been knocked out of the struggle, and there were rumours of a planned attack in the West that would win the war." 4 P & D Snow It wasn't until the Russians collapsed on the Eastern front that German victory seemed a possibility and even this was for fortuitous reason. The Russian revolution or 1917 brought in the Bolshevik rulers who removed Russia from the war, rather than a victory on the part of the German. Nevertheless the necessity of protecting both fronts had demoralised and greatly weakened the war effort. The freedom offered after Russia's withdrawal though meant that they could now launch a serious western offensive; The Ludendorff offensives. American involvement towards the end of the war was of immeasurable benefit and was contestably the most important reason for allied victory in WW1. Originally being of passive assistance to the allies, through the supply of resources, the US had refused to get involved. Arguments with Germany over their unrestricted submarine warfare policy and the suspected sabotage of American munitions supplies had began to sway US military isolationism but it was the publishing of the decoded Zimmerman telegram which prompted official American involvement in the war. The US then committed to being an 'associate power' working alongside, but not with, the allies. The US entry into the war forced the German High Command into a desperate position, whereby they were forced to attempt the risky spring offensive of 1918. ...read more.