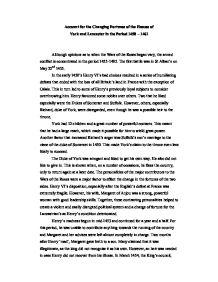 Account for the Changing Fortunes of the Houses of York and Lancaster in the Period 1450 - 1461 Although opinions as to when the Wars of the Roses began vary, the armed conflict is concentrated in the period 1455-1485. The first battle was in St Alban's on May 22nd 1455. In the early 1450's Henry VI's bad choices resulted in a series of humiliating defeats that ended with the loss of all Britain's land in France with the exception of Calais. This in turn led to some of Henry's previously loyal subjects to consider overthrowing him. Henry favoured some nobles over others. Two that he liked especially were the Dukes of Somerset and Suffolk. However, others, especially Richard, duke of York, were disregarded, even though he was a possible heir to the throne. York had 12 children and a great number of powerful contacts. This meant that he had a large reach, which made it possible for him to wield great power. Another factor that increased Richard's anger was Suffolk's son's marriage to the niece of the duke of Somerset in 1450. This made York's claim to the throne even less likely to succeed. The Duke of York was arrogant and liked to get his own way. He also did not like to give in. This is shown when, on a number of occasions, he flees the country, only to return again at a later date. The personalities of the major contributors to the Wars of the Roses were a major factor to effect the change in the fortunes of the two sides. Henry VI's disposition, especially after the English's defeat at France was extremely fragile. However, his wife, Margaret of Anjou was a strong, powerful woman with good leadership skills. Together, these contrasting personalities helped to create a violent and easily disrupted political system and a change of fortune for the Lancastrian's as Henry's condition deteriorated. ...read more.

Henry's madness begun in mid-1453 and continued for a year and a half. For this period, he was unable to contribute anything towards the running of the country and Margaret and her advises were left almost completely in charge. Two months after Henry 'mad', Margaret gave birth to a son. Many claimed that it was illegitimate, as the king did not recognise it as his own. However, an heir was needed in case Henry did not recover from his illness. In March 1454, the King's council, many of who supported York, appointed him 'protector of the realm'. At the same time, Somerset was banished to the Tower of London and the queen was sent to Windsor to tend to her husband. Margaret of Anjou was not popular among many of the English people. There were many reasons for this, and here unpopularity helped contribute to the collapse of the monarchy. One of the main reasons for the people's dislike of Margaret was her nationality. The huge loss of territory in France was hugely unpopular in Britain, especially with merchants and traders, as they lost a lot of their business. A lot of rumours were being circulated about Margaret, including the illegitimacy of her child. This in turn led to even more hatred towards her. Margaret was also unpopular with a lot of nobles. This is mainly because she dealt with the council instead of the commons and she appointed her friends and favourites to top posts. For example, Laurence Booth became Lord Privy Seal and the Bishop of Durham. The first sign of violent disturbance to take place in the Wars of the Roses was Cade's Rebellion in 1450. This was a protest over the murder of Suffolk, high taxes and the general happenings of the government. However, Henry was convinced that it was a coup to overthrow him, planned by York. The King marched an army out to meet him at London and the rebels were routed. ...read more.

This left London in rebel hands. However, the people of London were not happy with this, and they force Cade and his supporters to leave. Jack Cade was captured and executed, and the revolution thwarted. After the King's initial victory, his luck did not hold out, when he lost at St Albans in 1455. In 1459 and 1460, their forces were pretty evenly matched and the victories depended on positioning and tactical advantages. On 29th March 1461, the two factions met at Towton. Like the battles that preceded it, their numbers were relatively evenly matched, with the Lancastrians having the slight advantage. However, they did not have the weather on their side. The Lancastrians relied heavily on cannon, but the snow and driving wind dampened the powder, preventing them from firing. The Yorkist archers used the wind as an aid, and were able to fire their arrows further than those of the Lancastrians, resulting in a great reduction in the latter's fighting force. The Lancastrian line charged, and the Yorkists were forced to fight hand to hand. Hours later, the duke of Norfolk arrived with reinforcements and the Lancastrians were defeated with a massive loss of life on both sides. This was a decisive victory for the Yorkists and one that caused the King and Queen to flee and leave the throne empty. The battle of Towton was the final blow to the Lancastrians. It left them almost leaderless. Throughout the period 1450 to 1461, nobles had been changing sides. However, the Yorkists had steadily been rallying support against the Lancastrians. Henry VI was often seen as weak, and unfit to run the country and his wife Margaret was seen as an oppressive foreigner. Although the Yorkist numbers grew, the battles in the early part of the wars of the Roses were relatively evenly matched, with none of the forces being clearly the stronger. However, at the battle of Towton the Yorkists had the weather on their side and triumphed. This was the major turning point for the Yorkists in the Wars of the Roses. ...read more.