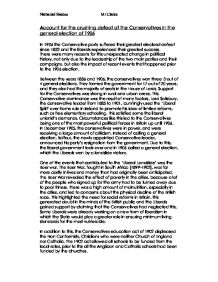 Account for the crushing defeat of the Conservatives in the general election of 1906 In 1906 the Conservative party suffered their greatest electoral defeat since 1832 and the liberals experienced their greatest success. There were many reasons for this unexpected change in political history, not only due to the leadership of the two main parties and their campaigns, but also the impact of recent events that happened prior to the 1906 election. Between the years 1886 and 1906, the conservatives won three 3 out of 4 general elections. They formed the government for 17 out of 20 years, and they also had the majority of seats in the House of Lords. Support for the Conservatives was strong in rural and urban areas. This Conservative dominance was the result of many factors, Lord Salisbury, the conservative leader from 1885 to 1901, cunningly used the 'Liberal Split' over home rule in Ireland to promote his idea of limited reforms, such as free elementary schooling. This satisfied some the liberal unionist's demands. Circumstances like this led to the Conservatives being one of the most powerful political forces in Britain up until 1906. In December 1905, the conservatives were in power, and were receiving a large amount of criticism. Instead of calling a general election, Balfour, the newly appointed Conservative leader, announced his party's resignation from the government. ...read more.

At this point a considerable number of the Non Conformists returned to voting Liberal. The 'Chinese Slavery' issue was a problem that occurred alongside the education act in 1902 to the licensing act in 1904. Chinese labourers were working for very small amounts and were being imported into South Africa. This angered the Non Conformists and the Trade Unionist. They saw this as immorally wrong and they feared that employers might bring them into Britain. This would have had an effect on the economy and the wages of labour would have decreased. With high unemployment in 1905, and there being not enough support for the unemployed, opposition to 'Chinese Slavery' took away a number of votes for the Conservative Party. The Conservatives also lost support from the Trade Unionist due to the Taff Vale case in Wales. In 1901 there was a dispute, between the Taff Vale Railway Company and the railway workers, it resulted in the workers going on strike. The Company took the trade union to court and they were allowed to sue the trade union for the profit loss it had incurred during the time their workers were on strike. This decision could only be overruled with an act of Parliament, but the Conservative party refused to introduce such a legislation. After Salisbury's death in 1902, Balfour acquired the position of Conservative Prime Minister. ...read more.