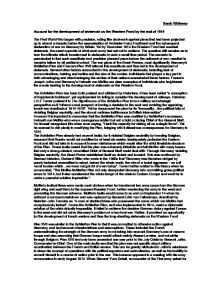 Sarah Whiteway Account for the development of stalemate on the Western Front by the end of 1914 The First World War began with precision, acting like clockwork against plans that had been projected up to almost a decade before the assassination of Archduke Franz Ferdinand and the subsequent declaration of war on Germany by Britain. Yet by December 1914 the Western Front had reached stalemate, the exact opposite of what each army had set out to achieve. The question still remains as to how the ultimate attack transformed to stalemate in such a small time period. The scenario is paradoxical in that such exactitude and precision planned years before the outbreak of war, resulted in massive failure by all parties involved. The war plans of the Great Powers, most significantly Germany's Schlieffen Plan and France's Plan XVII tailored this exactitude and thus led to the development of stalemate. Several other factors accounted for the development of stalemate, including lack of communications, training and tactics and the size of the armies. Individuals that played a key part in both advantaging and disadvantaging the armies of their nations exacerbated these factors. France's Joseph Joffre and Germany's Helmuth von Moltke are clear examples of individuals who heightened the events leading to the development of stalemate on the Western Front. The Schlieffen Plan has been both praised and criticised by Historians. It has been called "a conception of Napoleonic boldness", yet reprimanded for failing to consider the development of railways. ...read more.

Had it not been for German modifications to the Schlieffen Plan at this stage, the French would have faced near certain annihilation. Joffre was by far a more tactical and level-headed leader than Moltke and he was able to redeem himself in September. At this point he was able to regroup French forces and take the initiative against the Germans at the Battle of the Marne, achieving numerical superiority by placing 27 allied divisions against 13 German divisions. Yet this was after abandoning Plan XVII. Communications played a key role in the offensive war, deterring the strategies and thus eventually leading to stalemate. On both sides the High Commands were located several kilometres behind the fighting. This resulted in confusion between the soldiers and the High Commands, as by the time information was passed back and forth it was often obsolete. During the Battle of the Marne, Moltke directed the whole campaign from headquarters that were too far behind the fast moving German front lines. By being stationed in Luxembourg, he was not able to obtain a clear picture of the events as he relied too much on the optimistic reports of the armies. This gave the Allied forces more of an opportunity to bring up reserves and shift troops from the Lorraine front to Joffre's left wing, without being matched by the German troops. The German army had a complicated chain of command where at no time was a soldier ever free from supervision by a superior officer. ...read more.

The battle had extreme significance for the British, with 58,000 officers killed, lowering morale greatly. Even in such an intense battle, the size of each army managed to still be so mighty that problems attributed to the sheer size of the divisions still remained. In a war which began with such force and veracity, where the Germans believed they would be victorious by Christmas time, many factors emerged that seemed to hinder both sides from achieving what they had set out to do. Like with any war, the devastation from the unnecessary deaths can never be consoled by the victory of one side. What is perhaps worse is to have no victory at all, but rather an ongoing battle of attrition, eating away at each side until there is no hope and no reason left. The embodiment of this downfall was the stalemate that developed by the end of 1914 until 1918, as a result of the failure of the Schlieffen Plan and Plan XVII, communication problems, training and tactics, and the size of armies, on top of the inadequacy of Commanders such as Helmuth von Moltke and Joseph Joffre. These factors can be attributed to the development of the stalemate on the Western Front by the end of 1914 that led to the horror of trench warfare for thousands of German and Allied troops, including Officer Rudolph Binding from the BEF who wrote, "When one sees the...corpses, and corpses, streams of wounded one after another, then everything becomes senseless...so that one feels that all human beings are doomed in this war". ...read more.