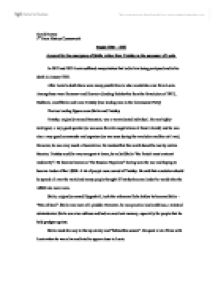 David Norton 5th Form History Coursework Russia 1905 - 1941 Account for the emergence of Stalin rather than Trotsky as the successor of Lenin In 1922 and 1923 Lenin suffered many strokes that led to him being paralysed and to his death in January 1924. After Lenin's death there were many possibilities to who would take over from Lenin. Among these were Kamenev and Zinoviev (leading Bolsheviks from the Revolution of 1917) , Bukharin, Josef Stalin and Leon Trotsky (two leading men in the Communist Party) The two leading figures were Stalin and Trotsky. Trotsky, originally named Bronstein, was a very talented individual. He was highly intelligent, a very good speaker (as was seen from his negotiations at Brest-Litovsk) and he was also a very good commander and organiser (as was seen during the revolution and the civil war). ...read more.

Stalin started as head of the Orgburo where he managed the communist Party machine. He soon became head of the Control Commission and here he controlled party membership. This was an important position for Stalin as he could replace people in the Party who didn't support his views with people who did. He could also reject membership from those he did not want in the Party. In 1922 Stalin made his way up to General Secretary of the Communist Party of the Soviet Union. Stalin told the Russian people that the Party should try to have Socialism in one country, not try to spread revolution over the world. This gained him many supporters as the Russian people were tired and wanted peace. One trick that Stalin supposedly played on Trotsky was that he told Trotsky Lenin's funeral was on the 26th January, when it was really on the 27th. ...read more.

This reassured Stalin and he soon regained his confidence. From January 1925 Kamenev, Stalin and Zinoviev were a triumvirate against Trotsky (who was now the ex-war Commissar). However, in the Party Congress of 1925 Bukharin and Stalin on the right clashed with Kamenev, Trotsky and Zinoviev on the left. The right believed in Socialism in one country and the left believed in Trotsky's theory of "Permanent Revolution". In 1926 Trotsky was dismissed from the Politburo and in 1927 he was dismissed from the Party. At the Party Congress of 1927 Stalin said there should be "no deviation from the Party line as interpreted by the General Secretary." This let Stalin control everything the Party did as he was the General Secretary. In 1928 Stalin clashed with Bukharin over the NEP (New Economic Policy); Stalin believed the country should be collectivised and nationalised. Bukharin soon resigned from the Politburo. In 1928 Trotsky was sent to Siberia and in 1929 he was sent into exile. ...read more.