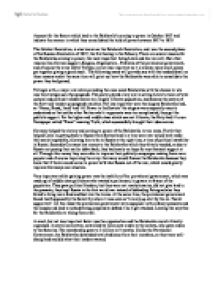 Account for the factors which lead to the Bolshevik's coming to power in October 1917 and indicate the manner in which they consolidated the hold of power between 1917 to 1921 The October Revolution, is also known as the Bolshevik Revolution, and was the second phase of the Russian Revolution of 1917, the first beeing in the Febuary. There are several reasons for the Bolsheviks coming to power, the most important being Lenin and his iron will. But other reasons like; German support, Slogans, Organisation , Problems of the provisional government, and of course the army led by Trotsky, are not less important as it is always many small pieces put together giving a good result. The following essay will provide you with the needed detail on these reasons and at the same time will point out how the Bolsheviks were able to consolidate the power they had gained. To begin with, a major role while providing the once weak Bolsheviks with the chance to win was the strategic use of propaganda. The poster played a key role in selling Lenin's vision of total cultural and political transformation to a largely illiterate population, and became the centre of the first truly modern propaganda machine. ...read more.

He had the command over the whole army and emphasizing discipline and obedience. The recruitment of the Red Army was based upon conscription. The commanders of the Red Army also consisted of former Czarist officers who were willing to co-operate, but they were watched over by the Political Commissars, who had the duty to teach the army revolutionary theories, and explain to them the importance of fighting the Civil War against the counter-revolutionaries. This helped in providing the army with a uniting target, making them fight more motivated. Also they had the advantage of inner and better lines of communications, in particular railway lines. This allowed soldiers to be transported quickly to battlefields, and sufficient supplies to reach them. Another fact which should not be forgotten is that officers would be punished to death if they were defeated in a single battle. Which shows us once again how successfully fear can be used as a weapon, as it was the fear of death that made the Red Army fight so successfully. In maintaining the power the importance of the army did not shrink at all!! Finally the most important ingredient for this success of the Bolsheviks in this revolution and the seizing of power was; Lenin. ...read more.

That strikers could be shot and , "non-working classes" got an obligatory labor duty. Furthermore Food and most commodities were rationed and distributed in a centralized way, private enterprise became illegal and military-like control of railroads was introduced. The Final measure introduced by Lenin to consolidate the power and give the population better living conditions, gaining their support at the same time, was the New Economic Policy. It required the peasantry to give the government a specified amount of any surplus agricultural, raw product, and fodder, and allowed them to keep the remaining surplus to use as capital or to trade for industrial goods. The so called NEP restored private ownership to small parts of the economy, especially farming and replaced the policy of War Commusim. In conclusion we can easily see, that a idealistic policy like the one of communism will always easily find many supporters in a country were the vast majority of the population is poor. But that even Lenin who strongly believed in Marxist theories and communism had in the end to betray his basic ideas while introducing measures like the NEP which are much more capitalistic than socialistic. He succesfully maintained power, but he did not maintain his believes, at least not while governing Russia. ...read more.