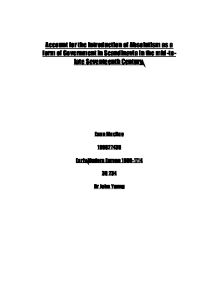 Account for the introduction of Absolutism as a form of Government in Scandinavia in the mid-to-late Seventeenth Century.

After the introduction of Hereditary Monarchy we see another of Christopher Gabel's colleagues becoming very influential in the introduction of absolutism. Bishop Hans Svane, together with Hans Nansen put forward the renouncement of privileges that would mean the nobility would also have to do the same, thus decreasing the power of the nobility further. The influence of Gabel, Nansen and Svane was instrumental to the events that led to the King's law in 1665 and subsequently, the most important statement of Absolutism in early modern Europe. 5 The introduction of Absolutism in Sweden in the second half of the Seventeenth Century is significant in that it created a hugely successful and organised state in Europe, and allowed efficiency in areas of bureaucracy and the military. To examine absolutism in Sweden it is essential to look at the structure of representation at that time. In the 'Diet,' there existed four estates, each with distinct functions and rewards. Looking at the Diet from the highest to the lowest we start with the 'first estate of the nobility' that were the titled counts and barons within nobility, exempt from taxation and rich in crown lands. Just beneath existed the 'estate of the clergy', which were predominately University teachers, Bishops and Priests. The role of the Clergy was to educate and preach to Society, remaining secular and loyal to the King. ...read more.

His reign as an absolute monarch did not bring the stability that occurred in Sweden, nor did it totally address the financial crisis that had been one of the reasons for hereditary monarchy. Frederik seemed to stabilise absolutism through careful planning and the alienation of those who were in a position to challenge his authority. In Sweden it appears that absolutism was different in that Charles XI addressed the problems facing Sweden while ruling as an absolute monarch. The Diets in Sweden existed after the introduction of hereditary monarchy and it seemed more of a natural progression than forced absolutism. This can be seen by the repeal of the Form of Government, which had previously curtailed the King's power. The King's bureaucratic and military involvement allowed the economy to improve in Sweden, and the penalties imposed on the regency and the elite nobles showed that while fair, Charles would be ruthless if necessary for the promotion of his Country. It is however worth noting that some historians believe such a natural progression occurred in Sweden as the King already regarded himself as absolute and thus had little to prove to the masses when this came around formally. Scandinavian Absolutism in the Seventeenth Century occurred due to the Wars between both Countries, the criticisms that resulted from the effects of this and the seizing of opportunity by the respective King's that the burghers and clergy had offered them. ...read more.