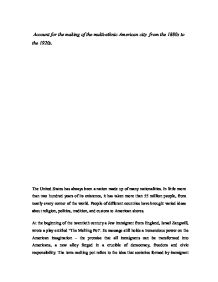 Account for the making of the multi-ethnic American city from the 1880s to the 1920s.

Account for the making of the multi-ethnic American city from the 1880s to the 1920s. The United States has always been a nation made up of many nationalities. In little more than two hundred years of its existence, it has taken more than 55 million people, from nearly every corner of the world. People of different countries have brought varied ideas about religion, politics, tradition, and custom to American shores. At the beginning of the twentieth century a Jew immigrant from England, Israel Zangwill, wrote a play entitled "The Melting Pot". Its message still holds a tremendous power on the American imagination - the promise that all immigrants can be transformed into Americans, a new alloy forged in a crucible of democracy, freedom and civic responsibility. The term melting pot refers to the idea that societies formed by immigrant cultures, religions, end ethnic groups, will produce new hybrid social and cultural forms. The notion comes from the pot in which metals are melted into new compound, with great strength and other combined advantages. In comparison with assimilation, it implies the ability of new or subordinate groups to affect the values of the dominant group. Although the term melting pot may be applied to many countries in the world, mostly referring to increased level of mixed race and culture, it is predominantly used with reference to United States and the creation of the American nation, as a distinct "new breed of people" amalgamated from many various groups of immigrants. ...read more.

Organized labour tried to prevent the factory employment of unnaturalized foreigners, while New York charged immigrants $20 for a hunting license compared with the $1 it charged citizens. The Immigration Restriction League joined labour officials to fight competition from cheap immigrant workers. Nevertheless, these kinds of leagues proved unsuccessful in curbing the massive late nineteenth century immigration. The anti-immigration leagues failed in large part because of the political clout of manufacturers. Manufactures valued immigrants because they wanted the cheap labor immigrants provided. Even the Chinese, who were excluded from immigrating by the Chinese Immigration Act of 1882, received praise from railroad Robber-Baron Leland Stanford for being diligent workers able to survive on very low wages. The result of the fairly free immigration policy, pushed by big corporations in search of cheap labor, resulted in a more ethnically diverse America by the end of the nineteenth century. The US was transforming into a multi-ethnic society during the era, but as the treatment of blacks in the South and the exclusion of Chinese immigrants show, it was not yet ready to become a multi-racial society. Along with providing cheap labor to the corporations, the ethnic diversity immigration caused helped manufacturers in yet another way. Because American workers were from so many different ethnic backgrounds, worker groups always found it difficult to unify. While socialism and communism began to gain strong footholds in European industrial countries, the ethnically diverse American working class found cooperation difficult. ...read more.

The moving of the upper and middle classes only added to the poverty of the cities. And because these upper classes were generally native rather than immigrant, the cities became predominantly immigrant. However, the American cities benefited greatly from the diversity of their population. Different racial and ethnic groups gifted the country in a variety of ways. From the English, came the gift of democracy. From Africans, came art, music, poetry, and inventions. Mexican Americans contributed ranching, Spanish architecture, salsa, and irrigation. Native Americans gifted the nation with many of the crops that now feed American citizens, a sense of respect for the environment, and spiritual sensitivity. Immigrants have made enormous contributions to the culture and economy of the United States. But their accomplishments have been made with great difficulty as their living and working conditions have been precarious in most of the cases. Also, at times, the United States has restricted immigration to maintain a more homogeneous society in which all the people share similar ethnic, geographic, and cultural background. Although some immigration laws have been relaxed, still today many new immigrants of different backgrounds face challenges in gaining acceptance to the United States. Returning to the idea of the "melting pot", as far as a preference for assimilation or pluralism is concerned, immigrant thinking varies. In an ideal world, the two would coexist, enabling newcomers to continue to observe the cultural practices that sustained their communities in their country of origin, and at the same time that they participate in American society in a productive way. ...read more.